At the border between craftsmanship and art, Alexandra Kehayoglou’s hyper-realist rugs are true homages to nature. Armed with her wool and her skills, Alexandra was inspired by nature to recreate spaces that imitate to an astonishing degree the natural texture of moss, grass or rock. More than simple decorative objects that beg to be looked at and touched, each of her creations is a truly sensory experience that reminds us how precious nature really is.

Like a historic novel, Alexandra Kehayoglou’s story begins in 1920, when her rug-weaver grandparents were forced to leave Greece when it was torn apart by the war with Turkey. Having arrived in Argentina, with no baggage beyond a few clothes, their weaving tools and their skills, they founded their own rug factory, named El Espartano in homage to their home town of Isparta. 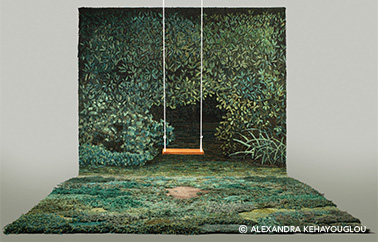 Having over the years become one of the biggest rug producers in South America, this family firm in the northern suburbs of Buenos Aires became Alexandra Kehayoglou’s childhood playground after she was born in 1981. ‘I grew up in family that made rugs. My grandmother brought her trade and her skills handed down by Greek ancestors to Argentina and even taught them to her children.’ Just like her father, the designer grew up with the responsibility of continuing the family tradition, in an environment that shaped both Alexandra’s perceptions of weaving and her particular sensitivity. Having obtained her degree in art from the University of Buenos Aires at the age of 35, Alexandra Kehayoglou got a job and experimented with wool offcuts from the family firm in her free time, taking advantage of the summer months when the workshops close. 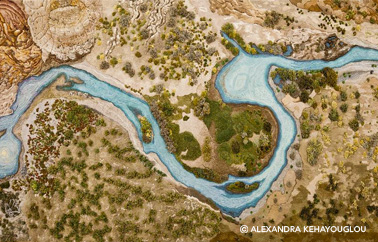 There, inspired by the abundance and diversity of nature in Argentina – from the fertile plains of the pampas to the Patagonian glaciers – the artist began to shape her vision, leading her to open her own studio in an annex of the family firm in 2008. ‘I realised that using the knowledge of rugs inscribed in my genes in an artistic way was inevitable. The style I created is an abstraction of the landscapes of my youth. I’d like everyone who looks at my rugs to feel themselves transported by them.’

In 2014, Kehayoglou was commissioned to create a monumental work for a catwalk for fashion designer Dries Van Noten. Inspired by John Everett Millais’ Ophelia, the young artist created a phenomenal rug consisting of 50 metres of greenery. A mixture of moss and lichen that looked more real than nature itself, the work shot her to prominence. There ensued several commissions and exhibitions that contributed to her stature. ‘When I spend time in nature, the will to create comes instinctively. Then I decide to tell a story, to do it justice. I sometimes feel that something outside me is calling me to do what I do.’ 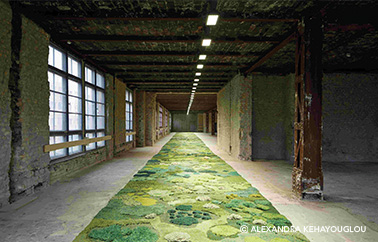 In 2016, with the global mood darkened more than ever before by extreme climatic and environmental problems such as the decimation of natural landscapes, Alexandra Kehayoglou’s work took on a political aspect. Looking for landscapes that now seem to belong to other words, the artist undertook geology-inspired journeys to make herself, through her unique works, the spokesperson for forgotten landscapes in need of conservation. From Patagonian tribes threatened with extinction to geological phenomena on the island of Milos in the Cyclades, via the problem of the Santa Cruz River dam, her rugs pay homage to endangered landscapes as much as they alert us to their state in a kind of premonition of the coming ecocide. ‘I live in a green bubble. I feel that my aim is to weave more greenery, as a reaction to the progressive disappearance of our natural world. I carry the flag for Mother Earth. I weave to sensitise people – to encourage them to love Mother Earth too.’ Hence, the uniqueness and strangeness of each of the pieces hand-weaved by Alexandra Kehayoglou references the preciousness of nature that we are trying to preserve… If you can’t get your hands on one of her marvellous rugs, Walther König’s monograph on Alexandra Kehayoglou is out this year. 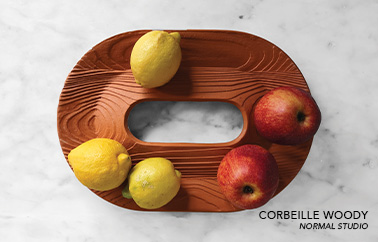