Of German origin and a cosmopolite by heart, Christian Haas followed a “classic” route with studies in Industrial design in Munich before moving on to a more diverse and international field. He regularly moves between his work for famous brands and his more personal projects, that gleam with a precise and inspired charm. Before moving to Porto, a place he now calls home in between trips to Japan, he had been living in Paris for seven years.

His journeys have lead him closer to factories, and as a result Christian Haas chose to set up his studio in Porto after having entertained a long collaboration with one of the area’s renowned porcelain makers. “Porcelain is a material that I took on with great pleasure, during my studies and after, while working with a big German glass-maker. In a way, I have picked up tableware as my speciality. I love all the constraints related to the production of small-sized objects since they require accuracy and creativity in order to reach their perfect curves and pitches. In Portugal I have found an exceptional environment of craftsmanship, over here, people are really willing to try out new things and to invest themselves in the making of mock-ups and prototypes.” The abundance of this local expertise is nowadays found at the core of his more personal projects as a designer : “The impressive marble crafts existing in Porto’s vicinity inspired me to want to have a go with this material, yet I had the feeling that it had all been done already. With ‘Vague’ inspired from a wooden tool that I found in a flea market in France, I wanted to use the material in a different way, in a somehow undefined manner. 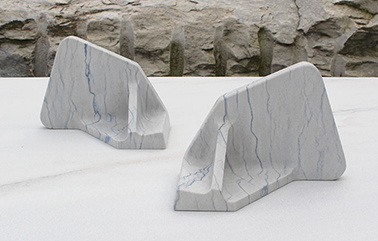 One does not see right away that it is a book holder, it’s almost a small sculpture.” It is most certainly the abundance of creative and technical proficiency in this country which have prompted the designer to tackle large scale projects such as the design of lights and furniture. A change in sizes and settings: Christian Haas flies regularly to Japan in order to work with big brands. Immediately seduces by the country’s unique aesthetic culture, that wonderfully combines complexity with clean lines and harmoniously reconciles tradition and modernity, he created the noted chairs series, Scout, for Karimoku New Standard, a set released in 2015. 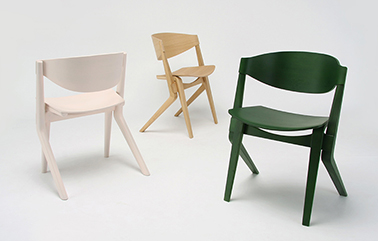 More recently, he’s been part of a region, renowned across the world for its porcelain products, to collaborate with all the regional craftsmen on a dedicated collection to celebrate the 400th anniversary of this local trade, that is to be celebrated next year. This return to porcelain isn’t his only project, and Christian Haas keeps on working at the same time on furniture design: in 2016 he’ll launch a full collection of tables, carpets & shelves… for the famous concept store in Berlin, Andreas Murkudis.

If he creates projects for big brands, taking great care in ensuring that the home’s serenity and heritage come before his own signature, Christian Haas knows all too well what is at stake with production. “When working for industries, processes are extremely long. You have to somehow be a visionary, since a project will take years before coming out of the production chain. The history of the brand must be perfectly accounted for, but also one needs to understand where they want it to be in 3 or 4 years, once the project has truly been launched. Armed with this experience, the designer meanwhile reveals himself through more personal work with art galleries, which enables him to both speed up the production time but also to quench his creative urges inspired by his many travels. Sold in galleries across the world, the Ropes series was one of his first personal ventures. “I had the idea for some years, to combine LED technology, something associated at the time with the cold, almost clinical, High Tech universe, with textiles in order to render it more lively, more organic.’ The unique pieces consisting of random knots taken from Japanese bondage, are luminous ropes that stand in living spaces as never before seen artistic lights. Out with knotting and in with folding. While creating Rain , a series of coffee tables for the Bensimon Gallery, Christian Haas once again leant on Japanese tradition and created hundreds of origamis with pieces of paper before selecting the most surprising and graphically perfect shapes as bases for the table tops. 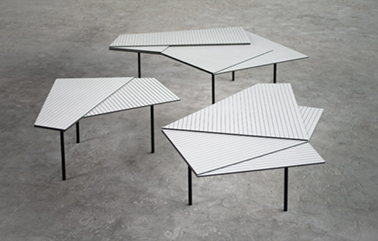 A master of all that is unpredictable, the designer has most recently ventured to tame balance by creating an impressive light mobile. With Act, a floating light committed to the mystery of balance, Christian Haas makes use of LED technology, as he did with Ropes, with the precision of a poet. For Designerbox, Christian Haas has created Tactile, a signature object that carries over the theme of folding and graphical aesthetic that he loves. He leaves it to chance as to how the subscribers decide to arrange and adorn the grids. 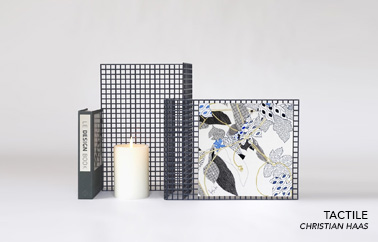