creators of the Murakami bookends

A multi disciplinarian and complementary duo, Marie Dessuant and Philip Bone met at Fabrica in 2012, respectively a designer and a graphic designer, French and British, the pair settled in Paris in 2014 to create their eponymous studio. Fluent in both 2D and 3D productions, the pair illustrates itself as much in object design as in graphics, photography, art direction and set design for various brands such as Another Country or Bensimon Gallery , for luxury brands such as Céline or Comme des Garçons, or also for art galleries and artistic events such as Biennale Intérieur in Courtrai, Belgium. 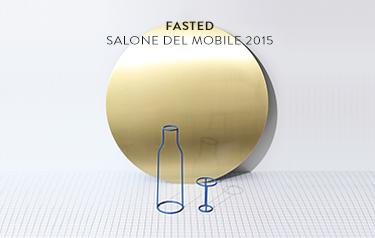 Marie Dessuant and Philip Bone of the eponymous studio met at Fabrica, a research center in communication and a trans-disciplinarian laboratory financed by the famous brand Benetton that each year selects young artists from over the world to work on common projects. Under the leadership of head of design department, Sam Baron – the designer of designerbox#0, Marie a young and promising French designer, having received the Cinna-Ligne Roset Prize, and Philip a young talented English graphic designer and art director got into the center for one year during which they expanded their fields of expertise and action. “Right after my graduation in Graphic Communication, I had worked in a big London agency and I never had been confronted to design objects.” Philip confides,“Sam Baron, who was very open minded, allowed me to experiment in this field. It was a tremendous experience and enabled me to work immediately in pair with Marie”. This formative and expressive year enabled our two designers to measure the creative potential of their duet.

« Our strength lies in our identity, it’s our complementarity, we do not limit ourselves as far as types of project are concerned»

Artistic direction, interior design, furniture or objects, visual identities and graphic design…we land on all these subjects together, channelling the same energy”. Although, of course, each of us has his or her own specific set of skills to take the lead on some technical issues” adds Philip. Prolific and enthusiastic, the Dessuant Bone pair settled in Paris in 2014 after a quick foray in London founded their studio some months after their arrival to start a story whose chapters have added up back to back, one never quite resembling the other. “For any project, we start over with a blank page; our creations are systematically related to their specific origins and we try to highlight them.” Marie insists. Their very first project symbolizes perfectly this narrative will: “On the occasion of the “Biennale Intérieur” an interior exhibition in Courtrai, France, we were invited in 2014 with other designers to exhibit in a classroom in a school that was about to be torn down.

Rather than showcasing our creations randomly, we decided to turn the light on the buildings strong history as an ultimate celebration of its own wealth.” The pair thus decided to cover the school room with black plastic tarpaulin in which cut off spots revealed the building’s most emblematic architectural bits or instances in life as being remarkable testimonies thereby elevated to the status of art pieces. As a result, the visual expressivity of the duo hits the target because it is always referenced and mastered: “We put great care into all that relates to communication and we shoot ourselves all of the work that we produce. It’s one of the many perks of our interdisciplinary.” underlines Marie. “90% of the people see our work on the internet since few will be able to see it live.” adds Philip. For Studio Dessuaant Bone, the creative history must be as well packaged as it was written; a testimony of this is the wonderful set design created to shoot their Fasted series and the original images of their Jurassic Light 117 designed for Another Country. 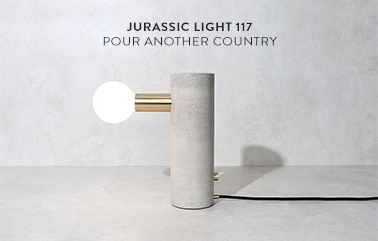 “As far as communication is concerned, one huge inspiration is David Bowie he had a vision that captured absolutely everything : from music, costumes, technology to LPs’ covers and shows…” claims Philip enthusiastically. “Designerbox is great working on the object itself but also on the magazine’s design and some of the photography inside. This is precisely the global take that we are aspiring to have ever since we handled it previously on a larger scale during our combined work on the Honor Café in Paris for which we worked on both the interior setting and the identity”. 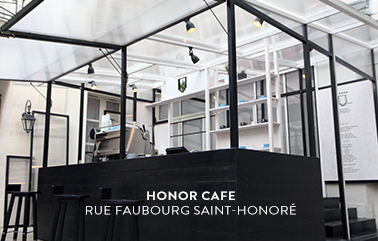 Already renown and very sought after, Marie Dessuant and Philip Bone select carefully the projects on which they work to find the time to master their contents and appearances. “We need some breathing room during busy periods in order to restore our inspiration. Reading is an integral part of these much needed resting periods so indispensable to the creative process,” insists Marie: a hiatus on the shelf, Murakami, the book holder imagined by the duet materializes one of these resting periods so dear to their heart. 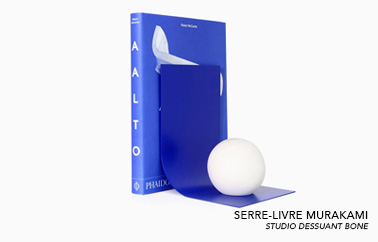