Free designer - creator of the DesignerBox #66

To bring people together, there’s nothing better than music. To warm the hearts, there is nothing better than a little light at- the center. Accessible, itinerant and lively, the top-of-the-range Osmoze basket is, beyond the technological feat, an invitation to discover the unique universe of the designer and free thinker matali crasset.

Oriented towards an optimistic future, the designer’s world is populated by hybrid, mobile, evolutive and colourful structures and spaces that conscientiously broaden the field of possibilities. «Rather than the regularly repeated injunction to produce objects that «make sense», I prefer to work on reinventing the function,» she explains. Thus, the designer systematically took the step of «taking a step aside and looking at things from the outside» to question their validity. In her early days, she directed Tim Thom, an integrated design structure created by Philippe Starck for Thomson Multimedia from 1994 to 1997, and throughout this period she worked to domesticate technology, challenging the cold, black and conventional aesthetics of high-tech objects, and giving birth at the time to eminently sympathetic UFO products such as the Don O radio-cassette.

Subsequently, many everyday objects and furniture became subjects for reinvention: she questioned, for example, the relevance of the armrests, which made it possible, in a distant past, to distin- guish the chair from the one that lead. Soft, dynamic, repositionable at will in the forearms and head, and even totally removable, the armrests of the «Extension de générosité» pour Campeggi chair break with the aesthetics of their ancestors to propose multiple scenarios of use consistent with contemporary life.» 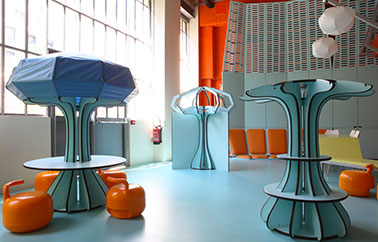 Even before designing objects or spaces, matali crasset imagines life scenarios, breaking rites or codes and always integrating values that she cherish. Hospitality, generosity, empathy, autonomy and mobility are all key words inherited from childhood – born in Châlons en Champagne and the daughter of a farmer, the young matali was raised in the open air in an environment turned towar- ds the outside world – and which today punctuate the designer’s creations. One of his first noticed projects, Quand Jim monte à Paris, or La colonne d’hospitalité, created for Domeau & Pérès in 1997, is intended to equip small urban spaces with conviviality. A fun and practical alternative to the boring sofa bed, the column equipped with a bed, a night light and an alarm clock is generously deployed and allows you to welcome your friends in an optimal way. Presented at the Paris furniture show in 1998, the project was praised by critics and immediately adopted by the public, who integrated it «as a space and not a commonplace extra bed» 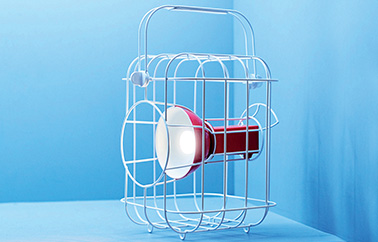 From that moment, matali crasset does not define herself as a furniture designer but as a creator of living environments, implying the entire space. After the success of the column, multiple proposals of collaboration followed, taking matali «from scenography to furniture, from graphic design to interior architecture» and allowing her to collaborate with some major industrial groups such as Carrefour or Ikea, without giving up her freedom of thought, values or even her singularity.

“I am committed to the extent that I like to succeed in mixing the artistic, ecological and social aspects”

The acute awareness of social issues also naturally leads her to many collective projects such as the MuMo 2, a truck-museum bringing contemporary art to the countryside, the School of Budding Wheat, a model of educational and cultural approach that she has entirely thought out and developed, or, more recently Saule and the Hooppies, a mobile structure and musical tour for children, commissioned by the Pompidou Centre and designed to travel to places where access to culture is complicated. «I am committed to the extent that I like to succeed in mixing the artistic, ecological and social. In France, we are strong enough to combine these notions, which is not the case in all countries.» As a defender of a broad vision of progress, matali crasset has never considered limiting herself to areas traditionally reserved for women, such as interior design or decoration. «In the same way, I have always refused to draw vases! ». But since all scenarios are conceivable, her recent encounter with Sèvres gave rise to the «Capes», a collection of vases where matali drew nothing: she chose shapes from the manufactory’s rich catalogue, then in the manner of a couturier, she cut, glued, inverted the shapes giving birth to these antropomorphic silhouettes. 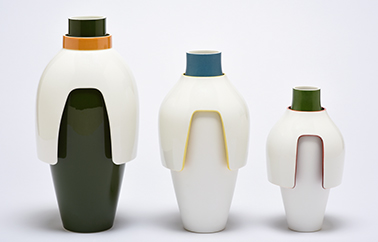 Traditional know-how, social projects or new technologies: matali crasset navigates with conviction between universes, to successfully propose his unpublished scenarios. The object of box #66, Osmoze returns to the creator’s beginnings at Tim Thom and unwinds – wirelessly – the course of a story to be shared.