« Through the looking glass »

For want of a genie, putting light into a bottle was an idea that couldn’t fail to seduce Bina Baitel. Her taste for innovation and her propensity to create hybrid or modular objects make this designer a veritable magician. But don’t be fooled: her highly poetic pieces are based on technical wizardry, too. 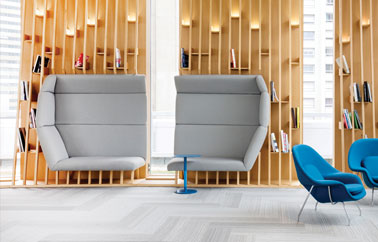 A graduate of the Ecole d’Architecture Paris La Villette and a DPLG (state-registered) architect, Bina Baitel has run her own design and architecture studio since 2006. She stands out mainly through her permanent quest for innovation, which quite naturally leads to involvement in urban regeneration projects such as Sogeprom’s recent refurbishment of the top two floors of Tour Ampère E+ at La Défense. The tower’s technological showcase, this space, made up of a library and a relaxation area designed in its entirety by Bina Baitel’s studio, has a huge light – one seven metres high and visible from the outside of the building – that elegantly echoes the undulant curves of the building itself. It’s noteworthy that this piece of signature design with its unique aesthetic is also a technological wonder: the light, which changes naturally in response to the light outdoors, is controlled by a simple smartphone app. 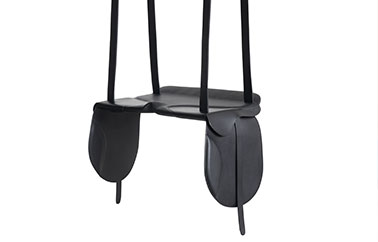 Indeed, it’s through light that Bina Baitel came to design, when she conceived, in 2008, Pull Over, a lamp wrapped in a ‘skin’ that furls around on itself like a turtleneck to modulate the brightness. Baitel’s first designer object, fêted by the VIA (Valorisation de l’Innovation dans l’Ameublement – Promotion of Innovation in Furniture Design), set the tone for an innovative and poetic but also probing career in design.

From the very outsdet, Bina Baitel’s studio was on a mission to question the relationships and interactions between users and the objects around them, with the main focus being on interactivity and sensuality.

Thus, the designer won the call to create contemporary rugs for the Cité Internationale de la Tapisserie 2012, in partnership with the Cité du Design Saint-Etienne. Confluentia, a domestic landscape unique in its genre, situated at the meeting point of furniture and rugs, inspires the user to dream, to let go, to contemplate…

Now the designer of an array of projects that lie at the border between art and design, Bina Baitel plans to focus on developing her own collection. From the Captcha mirror engraved with the kind of coded message one comes across on the internet, reflecting society in the age of digital natives, to the Prémonitions collection of precious pieces that blur the lines between design, couture and fine jewellery, via the Serpentine range in sculpted concrete created with the outstanding manufacturer-artisan Silians and inspired by Greek mythology, the Bina Baitel Collection is made up of exceptional pieces that evoke one-off experiences. 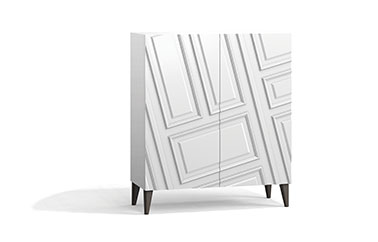 Side by side with this very personal mission, the studio collaborates with French and international partners, always with the mind to leave its unique signature on all projects. Now a bestseller, the Astragale collection developed for Roche Bobois cleverly subverts the codes of Haussmannian architecture, celebrating French art de vivre with a soupçon of humour and some unexpected touches.

More recently, the designer’s strong taste for narrative led her to work with the Quinette Gallay design house – an expert in seating for theatres, auditoriums, conference centres and cinemas for 70 years – in developing theatre and cinema seats as inspired as they are technically irreproachable. Moved, finally, by the love of fine materials and exceptional craftsmanship, Le Studio Bina Baitel is famed for its prestigious collaborations, such as the Volta revolving seat created in 2020 for the Maison Philippe Hurel, blending curves and contemporary technology to swathe the user in a timeless cocoon.

Chosen by DesignerBox and the teams from Du Coté de Chez Vous for the clarity and evocative potential of her work, Bina Baitel has returned to the light with the ELO lamp. Its archetypal, familiar shape transcends simple notions of conviviality and mobility to invite one to select from an array of different uses. 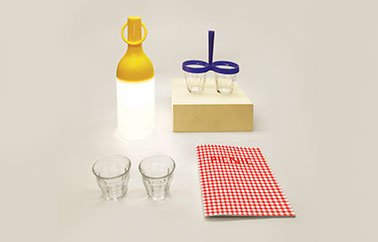