When he talks about his creations, Sebastien Herkner forgoes the use of “I” and systematically uses the 1st person of the plural. A striking grammatical habit for this prolific designer, the Art Director of Verreum who’s been hailed as “Young Designer of the year” by Elle Decoration in 2015.He seems to be immuned to any symptom of head ballooning. During our interview he had the opportunity to demonstrate this fact many times over : in his view, success is something that is necessarily shared

In Addition to the staff, currently consisting of four people, of his studio launched in 2006 Sebastian Herkner is more than willing to grant the paternity of his projects to the craftsmen with whom he works : “the starting point of our products most of the time streams down from the industries to which we are confronted. To us, it is very important to meet the makers, to understand the constraints and inner-workings of their production, in order to be able to come up together with an object or some furniture. Communication is key to have our idea come to light.” As a staunch defender of a humane and shared design, Sebastian Herkner is keen on putting under the limelights the specific know-how as well as the decisive cultural backgrounds.

« I believe that designers are responsible for and must ensure that knowledge is carried over from one generation to the next. »

«This is only possible when historical and specific producers are sustained, and sadly, nowadays, they are too often destined to disappear.” For example, Moitié the tray imagined for Designerbox has its roots in the close professional relationship that the design studio entertains with a Bavarian ceramic maker and in Sebastian Herkner’s desire to have its know-how showcased through its integration in a modern- day venture. 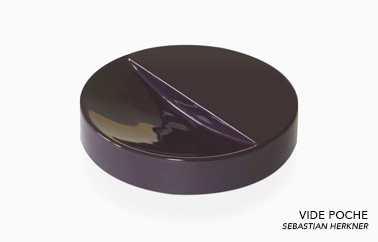 As a remarkable symbol of its activism, the BanjoolIi chair from its collection M’Afrique de Moroso launched in 2013, is an ode to the singularity of Senegalese culture : in fact, the studio collaborated with local workshops and furthermore this piece’s name (Banjooli in Wolof) and shape are inspired by ostriches mating dance. “The construction of this social project, first initiated by Moroso, was very important for us. We spent times with people over there to develop the product : those are unique moments, striking memories…” To maintain its activism, the German design studio chooses scrupulously the editing houses it works with. Historical enterprises or young publishers, age is not an issue : the main point is to stand out with a singular production policy. “ Today, what with the internet, the blogs and many exhibitions, a kind of standardization is taking place in design : many designers spell out the same language most of the time inherited from the Scandinavian universe.” As much as he puts under the limelights the local know-how, Sebastian Herkner likewise defends the specific identities of some editors. Such was the case with La Chance for whom he created the pedestals Salut in 2013.

The desire to stand out in order to create each time something unique and new, is found everywhere in the creative process of the studio. If inspiration can be commonly, fortuitously or daily found, the way to handle it must be novel. An uncanny coincidence is that both Sebastian Herkner’s Oda Lamp for Pulpo and FX Balléry’s Tseretnip, the designerbox#18, were inspired by the famous pictures of water towers by Bernd and Hilla Becher. With Sebastian Herkner the surprising volumes caught by the german photographers gave birth to a radically different work that led to the creation of an amazing bubble-shaped lamp.“We called a glass blower and the challenge was to produce the largest possible ball for this lamp.” 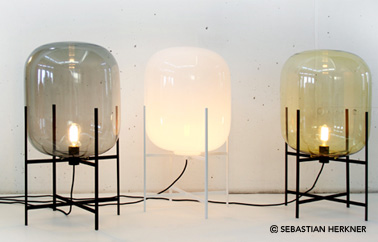 In the end, whatever the inspirations or the materials used, “the designer’s added value lies in his originality and will to transfer some meaning into the product”. The rigorous non conformism claimed by Sebastian Herkner is a daily challenge akin to an act of faith. « In 2008, our Bell tables for Classicon were the consequence of our will to create uncanny coffee tables. It can be found in the paradoxical use of materials : glass was used for the structure and metal for the tray when logic would have called for the reverse. And we ended up with a striking result unseen before at that time”. In the same way, the Pipe Chair imagined for Moroso this year with its imposing frame made out of iron rods of 8 cm in diameter goes against the current trend which says that the structure is to be reduced to its bare minimum, to a vanishing point. 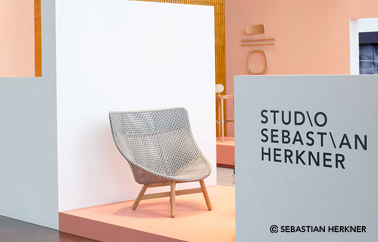 “Its marshmallow like back and ultra-comfy seat cushion create a contrast all the more interesting”. A happy and highly studied blend of material, some know-how and some stories, the plural design of Sebastian Herkner achieves the tour de force of rendering his non conformism palatable to modern taste.