Serge Bensimon, storyteller of the world - creator of the DesignerBox #50

Just like the famous sneakers that have made the surname well-known in the international sphere, Serge Bensimon never stops reinventing himself. Compulsively on the lookout, in his creations he narrates a generous and colourful world in which black is banned: optimism is compulsory!

Fashion, deco, design, the art of living … the less daring among us might not like it, but since his debut Serge Bensimon has joyfully sailed through all the domains of creation and is not prepared to be locked up in a box, except for just this once and of his own free will. A child who wore second-hand clothes, he grew up in the military surplus store set up by his father in the sixties. He was tempted for a while by the world of mechanics, but he soon changed his mind so that he could take advantage of an evident talent as a visionary. His path to success was from then on a short one. After taking the military style onto the streets by dressing fashionable people in US army accessories, the creator had the wonderful idea of dying soldiers’ sneakers bought by his father in large amounts, but which had not been sold. This is how Serge created Bensimon… 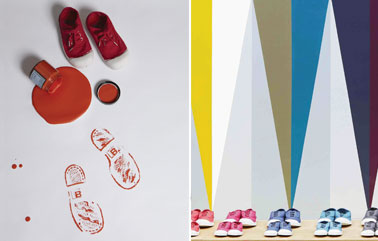 And this was just the start: when his father died, Serge, the creative one, with his younger brother Yves as manager, gave up the surplus store and developed prestigious partnerships – Donna Karan, J. Crew, Agnès B. – and more and more new concepts, always with their exponential and communicative enthusiasm. It was an initiatory trip to the United States that doubtless sealed the destiny of the two brothers, at the time aged 22 and 24. With a few dollars in their pockets, they went from east to west in this gigantic country, not missing a thing. They came back with their suitcases empty but with their heads full of ideas. Some years later, in 1986, they launched a line of travel clothes under the label “Around the word”. The illuminator had been illuminated and Serge. Bensimon abolished the rhythm of the seasons dictated by fashion and proposed narrative collections with an itinerant vocation. 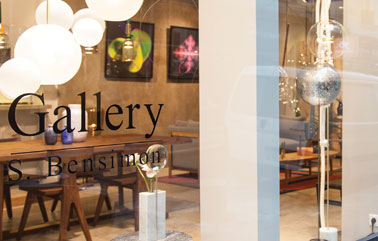 Quite naturally, it was from objects gleaned on his numerous trips that he later sought to explain the more or less distant cultures that his sensitivity had met with. The first “Man around the world” concept store opened in Le Marais in the early 1990s with the desire to share and the openness that characterizes the Bensimon spirit. Then the honour went to the United States, Japan and England, opening boutiques that settled with no premeditation into Serge’s wanderings. More recently, it was in colourful Mexico, marked by the amazing buildings of architect Luis Barragan, that the creator chose to shed light with a range of hues developed in partnership with Ressource.

« My job is first and foremost to please and then to please myself. That's the most important thing ! » 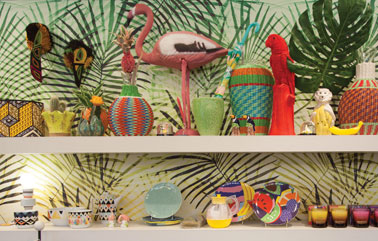 Each collection evokes a culture, but what interests Serge Bensimon first and foremost is the human aspect. From the Amish and American Indians on his first road trip in the country to his Mexican hosts, he collects encounters as if they were conquests won by his sense of togetherness. Far from forgetting them, they are precisely what this master of curiosity wishes to narrate. When he set up the S. Bensimon Gallery in 2010, this time he wished to shed light on young talents in design and contemporary art. Following his heart, in search of the human aspect in each project, Serge Bensimon is always there where nobody expects him. In the end the story might be premeditated: his pronounced taste for innovative concepts and daring entrepreneurs meant that he just could not ignore the Designerbox adventure…