Designer at the head of his own studio, teacher at the Ecole Bleue, Jean Couvreur lives, breathes and dreams design. Beyond a simple profession, design is, for him, an opportunity to develop a real philosophy that he applies to his different projects. «Through a simple drawing, the Jean Couvreur studio tries to reveal the essence of the objects that surround us.» he summarizes…

Firstable, the designer denies having a signature which could identify him at a glance.

“It would be tempting to describe my design as minimalist, but for me this purity is a consequence, rather than a will.”

Concerned to strip his achievements of all useless frills as to resist the temptation to mark them with his seal, Jean Couvreur favours elementary and easily understandable forms. 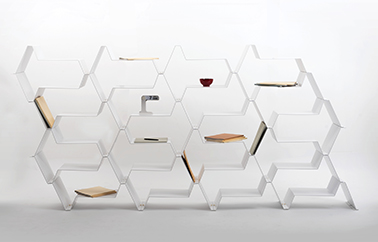 Rigorously simple, the CAKE shelf is enhanced by a basic and universal rhythmic to talk to everyone. «From the delicacy striations of a fairy cake to the elegance of the glass awnings of the Parisian steps, or the banality of the erasures that we scribble on paper when we wait on the phone, everyone will find their own reference in the motif, this is what makes it universal.» Refusing to cite any emblematic model or even current design trends that could be a source of inspiration for him, Jean Couvreur affirms that he rather feeds on the archetypal forms that make up everyday life and tirelessly finds «the extra» in «the ordinary». 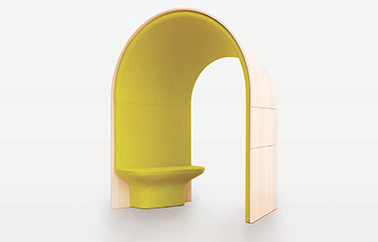 This purity of form and this ingenious reuse of universal codes are, of course, the result of careful consideration. "I happily repeat to my students that anything not essential is, for me, perfectly useless." Passionate about drawing since college, the designer has been working, since graduating from the ENSCI, to meticulously erase every unwanted pencil line that would pollute the function. As materials for action rather than reflection, the designer’s objects take full account of the imagination as well as the needs of the users. In the context of projects aimed at improving urban space, Jean Couvreur will prefer to recover or even purify the existing rather than saturate the landscape.

A concrete monolith measuring 3 metres by two metres colonised at will by a puddle of water activated by means of a crank, the Banc Frais, created for Lyon City tomorrow, is inspired by an ancestral technique of humidifying the stone to refresh city dwellers. In the same spirit, Le Plus Petit Gradin du Monde, takes up the known and naturally welcoming forms of cities to imagine an island of unique and singular sociability. Elementary… And yet not that simple: for those who take a closer look, each step is microperforated according to a very precise pattern that allows rainwater to flow. 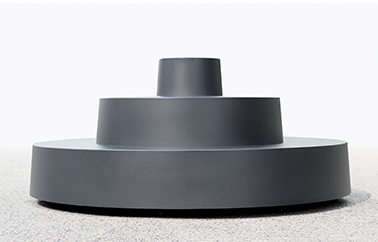 “ Drawing things in a simple way requires a lot of drawings ”

As a product designer, the studio also distinguished itself in scenography, working specifically on the creation of furniture or micro architectures. For the Musée de l’homme, he imagines, for example, Sonore: a wooden alcove designed to welcome visitors from the excitement of the outside world and immerse them in a sensory envelope thanks to an interactive technological device including a touch screen and a sound system. Under its apparent simplicity, the cabin redoubles its ingenuity to make the complex technological device it contains disappear.