From Ionic or Corinthian columns to Hausmannian mouldings via Napoleonic foundations and other Baroque ornamentation, every era has its quota of archetypal forms that enrich our long-standing and codified architectural and decorative language.

If in the middle of the 20th century, Modernists, following the precepts of the Bauhaus, favoured a strict minimalism that rejected all stylistic tropes, their successors – our contemporaries – happily draw on the classical catalogue, reinvesting period decoration with a healthy dose of humour.

ONE OBJECT FOR ANOTHER

There once was a column that was a table… The brilliant inventor of the Elo lamp, designer Bina Baitel, offers several of her luminous creations through Roche Bobois. Among them are the collection of Doric coffee tables launched this year, drawing with joy and vitality on the foundations of Greek antiquity but also recalling the 1970s Capitello armchair by 65 studio Gufram… This is not the first time the designer has used trompe l’oeil: her 2018 range Astragal features a sideboard, a wardrobe, a column and a cabinet that revisit the codes of Hausmannian architecture to the point of showing us the world upside down! The ambitious baron and prefect Haussman, who revolutionised Paris under the Second Empire by reshaping up to 60% of the cityscape, continues to inspire brilliant designers even today. Another creator dear to Designerbox – he designed our box #17 – José Lévy raised the level of herringbone parquet by using it to make a high-quality table for guests. They then progress across a ‘door-rug’ made from wool that has been sculpted, like wood, by hand. A former Compagnon du Devoir (member of the French organisation of craftspeople and artisans Mathias Kiss claims to free himself, in his Golden Snake work, of the classical codes of decoration – freeing mouldings of their solely decorative function and making them pure objects of reflection… 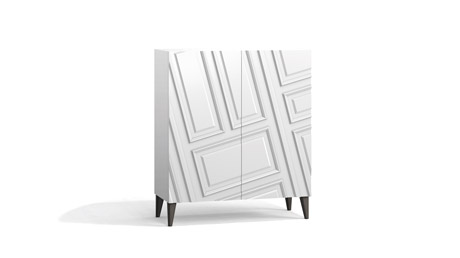 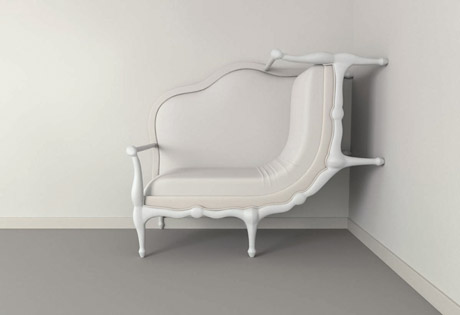 Flirting with surrealism, the work of Lila Jang, a young South Korean designer who did part of her studies at the Beaux-Arts de Paris (National School of Fine Arts), brings a kind of audacious poetry to period furnishings, drawing the spectator into a Tim Burtonesque fairytale on acid. Less twisted but just as joyful, José Lévy’s Endiablées for The Crystal Saint- Louis break conventions by joining the two parisons – bringing a ludic touch to the loveliest tables. 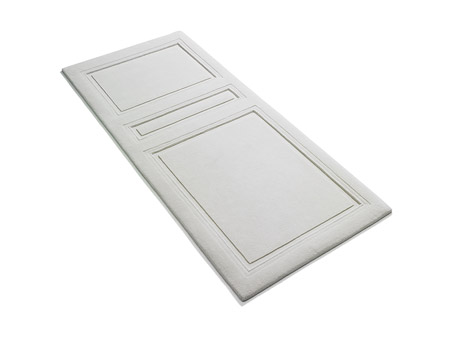 one wants to rework. Created in 2004 by Ferruccio Laviani, Kartell’s famous Bourgie lamp –which stands out for the dissonance between its baroque base and the polycarbonate it’s made from – bridges the generations, by example. This is also the case with Aurélia Paoli’s Nemours pattern, which melds extreme modernity and a heightened feeling for geometry with styles from French formal gardens – symbols of a bygone era now back in style!