« Taste is the most beautiful emotion we have»

Taste is the most beautiful emotion we have” states Anne-Sophie Pic with enthusiasm. The world’s most highly Michelin-starred female chef dedicates her life to reinventing flavours with genuine humility, labouring tirelessly on bold and unexpected taste combinations that have earned her global fame. An openness to arts related more or less closely to gastronomy and a curiosity about the world are other leitmotifs of this chef who made her first forays into cooking in her native Ardèche before creating her own culinary repertoire to take with her into new territories. “One always has emotional ties to the place one comes from. One can never completely get away from it.” Having completed her course in business studies followed by several apprenticeships abroad, Anne-Sophie Pic decided to return to her native region to take up the baton of a family tradition that had predestined her to become a chef. Her first aim: to master the techniques and precepts of French gastronomy. 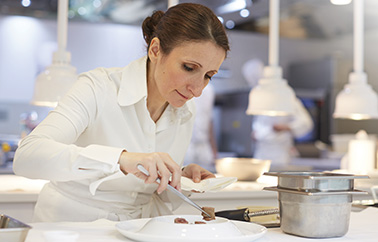 Having grown up in and around the kitchens of her father Jacques, himself a prestigious Michelin-starred chef and owner of the Maison Pic, Anne-Sophie conserved from her early years a strong olfactory memory awash in evocative aromas. “The Drôme is perfect geographically, with many aromatic herbs, fruit trees, edible flowers... Everything produced in the region today is a vast source of inspiration to me in my cookery, which is naturally fed by what grows around’“ Direct influences on Anne-Sophie Pic’s cooking are the cuisines of her great grandmother Sophie,head of the Auberge du Pin restaurant that drew foodies from all over France, her three-Michelin- starred grandfather André, and of course her father. An eloquent homage to her much-loved surroundings and their produce, Anne-Sophie’s dishes won a reputation that quickly spread beyond the Ardèche. 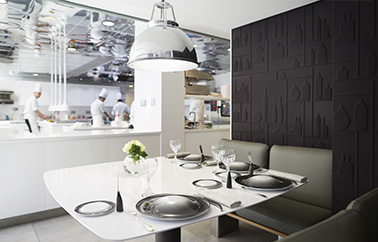 But if she happily draws on her roots, Anne-Sophie Pic also made her name by evoking memories of her travels, in dishes that are hers alone. Hugely influenced by her long periods abroad as a student, especially the four months that she spent in Japan – a country that changed her mind-set forever by opening it up to a variety of different food products – she takes endless inspiration from the “finesse and magical equilibrium of the incredible Japanese gastronomic culture”

While developing, over the years, a talent for bringing together local flavours with complementary tastes from further afield, Anne Sophie also recognises the intuitive side of her cooking – the result of ‘revelations’ that come to her by chance during her ceaseless gustatory research. Anne Sophie Pic’s love for travel is seen not only on the plate. It took on a much bigger scope thanks to the involvement of her partner and husband David Sinapian, who she met at business school, and with whom she works full time to develop the brand. After Lausanne’s Beau Rivage, and Paris and then London’s La Dame de Pic, which earned the chef her eighth Michelin star, the couple opened a third outpost in Singapore last June, with the aim being for it to obtain two stars.

But if the number of restaurants is growing, Pic’s recipe remains the same. ‘As in Valence, I’m striving to create a cuisine based on products local to the regions in which we are opening, at the same time as giving voice to my roots...’ Taking prestigious, delicious and visually beautiful French dishes into the international arena, Anne Sophie Pic sings the praises of a milk-rich cuisine “using lots of cream and butter to bring out a dish’s brilliance”. ”If I had to define my aesthetic style, I’d insist on my taste for white, because I think a dish should express itself in all its purity.” Sensitive to the aesthetic qualities of her dishes, Anne Sophie Pic is just as fastidious when it comes to everything associated with them, and these have a bearing, in her opinion, on the pleasure and the flavour: tableware, kitchen utensils and bespoke furniture. The chef, passionate about art in general, takes particular care when choosing the famous interior designers who work with her on her restaurants and is in fact curious in all areas of creativity. ”I’m an early Designerbox subscriber as well as a patron of the project. I love the idea of being surrounded by designer pieces – it stimulates creativity. And I think it’s important to make design as accessible to as many people as possible.” From there it was just a short step to creating something for Designerbox. An indispensable and very special kitchen accessory, the two-tone apron made by Le Jacquard Français to the chef’s specifications is an accessible product reflecting Pic’s own unique blend of elegance and simplicity. 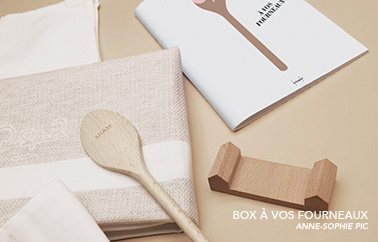