The rebirth of light

Describing his style as ‘direct’ and ‘free of embellishment’, FX Balléry refutes the label ‘artist’, defining himself as a ‘designer- entrepreneur’. And the term rings true: having co-founded Y’a Pas Le Feu Au Lac, his first design house, specialising in wooden products, he started all over again in 2009 with the launch of Arpel Lighting, which uses LED technology to rethink lighting within the context of contemporary interiors..

If the conception, development and sale of hi-tech lighting now occupies FX Balléry full time, his projects are not purely technological in scope. Blessed with a Cartesian spirit and uninterested in purely stylistic effects, he nonetheless has a certain narrative talent and discovered in design an ideal storytelling arena. He’s been, by turns, a spokesman for the crafts skills of his native Jura in eloquent, nostalgic creations such as the Les Montgolfières series for Y a Pas Le Feu Au Lac, and the creator of a unique industrial aesthetic that he continues to revisit with flair – as attested by his favourite work, the revitalised Pretty Vases, which have just been accorded a place in the Musée des Arts Décoratifs’ permanent collection. 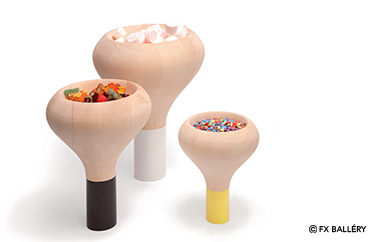 Hence, FX Balléry has, for many years, between blending poetry and functionality in his designs. As sensitive as he is rational, his fascination for light is as much due to the ‘magical’ power that this ‘non- matter’ wields over the spaces it fills, as it is to its absolutely primal and eminently practical nature. Passionate on this subject of such universal scope, FX Balléry sees LED technology as a means of revolutionising interiors lighting. At the outset, his company Arpel Lighting was called Goodbye Edison, so strong was the initial will of its founder to leave behind the traditional bulb – which he thought cumbersome and intrinsically limiting. Table lamps, desk lamps, wall-hanging lamps or hanging lights: without ever considering technology as an end in itself, the firm’s products, some designed by Balléry himself, have in common the fact that they engage fully with and re-transcribe the practical elegance of light, radiating it via small LED lights integrated into flat surfaces.

With Designerbox and the Thomson bulb, FX Balléry has revisited a place that some thought he bade farewell to. However, if he’s revisited the bulb for the first time in 10 years, this time it has little to do with its filamented ancestors. Diffusing light but also, and most importantly, connected, the Thomson bulb can provide its users with a number of services that mean they can interact directly with it or pre-register situations of their choice. It’s this innovative character and all the potential that inheres in it that its designer, inspired by the creations of Tim Thom, wanted to foreground. 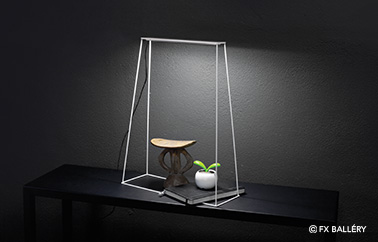 Its contemporary, elegant and wilfully minimalist lines may serve to emphasise the light’s obviously technological modernity, but the tray covered in recycled leather beneath the bulb invites you to use it as a receptacle for all your small daily objects. Conceived as a reference point or even a central island within an interior, LLUMM! is a welcoming and elegant object, practical and human, bringing together with assurance the universes of home automation and decoration by offering a new and decidedly bright view of cutting-edge technology. 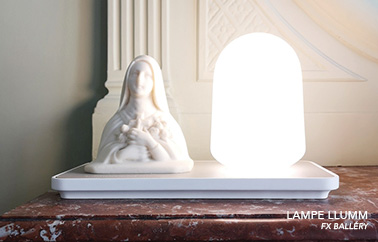