As a graduate of the Academy of Fashion and Costume of Rome, Maurizio Galante now devotes himself to various creative fields. He has worked for four hands with Tal Lancman since 2003, under “Interware” on scenographic projects, botanical, design or artistic projects. A creator of strong emotions and storyteller of a past memory, the internationally renowned designer captures each subject in a narrative angle to better immerse viewers and users into his dream world and into the confines of magic.

Behind a shop window on Avenue Daumesnil in Paris’ 12th arrondissement, if you go through the large red curtains, you will enter the poetic universe of Maurizio Galante, author of designerbox#19. At first sight, the universe of this prolific creator is like something from a fairytale in which objects are the heroes. Among them is ‘Drago’, his latest creation for designerbox. At first Maurizio Galante, fashion designer and graduate of Rome’s Academy of Fashion and Costume, followed parallel studies in architecture that he quickly abandoned. “It was very complicated for me to deal with the time that separated the first idea to the completion of the project,” he says. 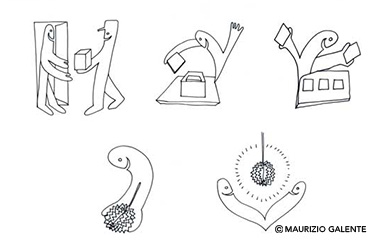 “Today I once again take on architectural projects and am much more at peace with this notion of time for reflection: it’s like planting seeds to see them germinate the following year.” The botanical reference is not used by chance: The art of gardens is now an artistic field that Maurizio Galante works on, as well as design, set design and haute couture. For the designer every creative field is an excuse to tell a new story. “An object or a piece of haute couture is first the memory of a technique, a craft, the story of a culture and a time past.” This atmosphere is one that Maurizio Galante likes to immerse himself in, creating a dreamlike and refined world all on his own. “My mission, or the mission of my creations, is to share good moments, emotions, tell stories, like a father creating a fairy tale for his children,” Maurizio says. He gives the example of his iconic chair, ‘Louis XV goes to Sparta’, which tells the imaginary story of “a king who wanted to take a trip to Sparta, the city symbolic of a minimalist lifestyle and design, but who never moved from his chair in the end … ”

If his design pieces describe a life dreamed up by their creator, then Maurizio Galante’s haute couture clothing lives two lives. “Both the life of the object to be discovered, and the story of the woman who wears them,” he says. “I am from the time when getting dressed was meant to convey who you were inside. There was something joyous in the garment, whereas today it is much more sophisticated.” The extreme refinement of the designer’s work is never rigid, but aims instead to give fluidity to the garment, allowing free movement and clean gestures. “I never do blazers or shouldered jackets,” he says, “because I find them too rigid. My work is both simple and complex: I repeat basic elements a lot of times. It’s like tribal music based on a few notes – it is the complexity of the repetition that creates the music.” Through this strict system Maurizio is in constant search of a fluid balance: this paradox between simplicity and complexity is the basis of the beauty in his work. The amazing, repetitive texture of his bolero ‘Drago’ has inspired the ‘Drago Light’, the object from the designerbox#19. Here, the repetition dresses the light and gives it a magical effect. “The shape of the lampshade resembles a kind of egg from a mythological animal,” he says. A distillation of the poetic universe of the designer, ‘Drago Light’ is also a story that begins with a beautiful emotion. “Surprise engendered by designerbox is a nice starting point,” says Maurizio. “It is a very nice use of the internet and this is what pushed me towards this project. 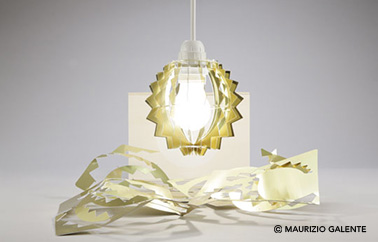 My intention is that people will contribute to the construction of our design piece, which will strengthen the link created and the story told.” For designerbox#19 the timing of its release creates a small miracle: between the history of the object, its magical effect and its creation of emotions. ‘Drago Light’ comes at the time of year when magical spirit is all around…