The young Belgian designer’s sleek and timeless aesthetic always hides hours of experimentation. Constantly looking for new, ingenious systems that add a jolt of modernity to the objects, Mathias van de Walle makes variable geometry part of his rigorous and meticulous work. Folding, inserted or modular elements recur in his designs, often revealing a fantastical element after a practical first impression. In 2013, while still a student, the young designer became known for his ‘Clicq Up’, a champagne bucket for Veuve Clicquot inspired by the ancient Japanese art of origami. A master of design at just 31, he marks each of his new collaborations with internationally renowned brands with an identity that is all his own confines of magic. With a mischievous eye and youthful look, Mathias van de Walle, creator of designerbox#20, does not seem to take himself too seriously. He is, however, very serious when it comes to his work. 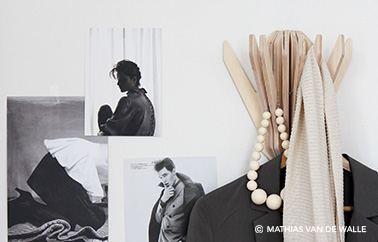 From his Brussels workshop, where he spends most of his time designing and developing products, the young Belgian designer takes a little break to talk to us about his personal story.31 year old Mathias recalls his first emotional connections with the objects around him. “I spent much of my childhood in a large manor, filled with all kinds of objects belonging to my grandmother,” he says. “The place fascinated me and I think that’s where it all started. Then I quickly started tinkering with designs of my own – from my huts to my bow and arrows – in my father’s garage.” Keen to develop his youthful passion, Mathias decided to study at the College of Architecture and Design in Brussels. During his studies he experienced an epiphany when he encountered the work of the Bouroullec brothers. “The encounter was decisive: they have a beautiful simplicity and at the same time a very recognizable identity. I like the thread that connects all of their work,” he explains.

From this arose Mathias’ idea of designing each of his creations with what he terms ‘simplexity’: “My goal is to always produce an economical design with a minimum amount of material, that is easy to implement and produce. At the same time, the work to achieve this is long and tedious! It requires hours of research. That is why I call it ‘simplexity’. Rigorous and mathematical, the young designer carved a niche, providing smart objects that add charm to everyday life. Years since he left his father’s garage, he continues to ‘tinker’ and experiment in his workshop, employing fun geometric shapes to create objects and clever utensils. With ‘Egg Cup’ – a practical and intelligent PVC egg cup made while he was still a student – it could be said he found his trademark style. This ‘simplexity’ is demonstrated again in a foldable champagne bucket inspired by origami. Designed in 2010, ‘Clicq Up’ was presented at the Milan satellite salon for promising young designers, where it was identified and adopted by Veuve Cliquot, marking a turning point in the career of the professional designer. Today Mathias van de Walle brings his minimal aesthetic to brands such as Linadura, Liparus or Bollia: “I hate all that is ‘bling bling’ or too trendy,” he says, “which is essentially doomed to disappear. I like the idea of timelessness in design.”In his work however, timelessness always goes hand-in-hand with modernity, with each object concealing a hidden facet or function that is the result of long hours of experimentation. 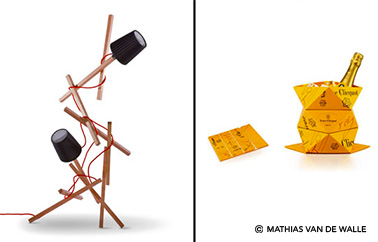 Brainy and playful by nature, Mathias van de Walle immediately accepted the challenge of designing an object for designerbox. “I love the concept. I knew it before being contacted,” he enthuses. “It is a daring challenge to create an object within such constraints of size and price.” For designerbox#20 he created ‘Hooks’, an item that literally opens up to reveal the ‘simplexity’ dear to the designer. With clean lines and raw wood, ‘Hooks’ is inspired by the mechanism of a book, and is intended to be deployed and positioned either on a wall or in a corner. Because of its modular nature, this everyday object is versatile enough for many uses and locations: “It can be installed in a bathroom to hang jewellery. It also has something of a small animal about it, so one can also easily imagine it in a child’s room, for example…” he explains, leaving subscribers free to choose the option that best suits them…