Having come up with several graphic hits in a generator, Leslie david possesses this slight edge that hits the right spot when it comes to trendy brands and buzz generation in the press. now a renown icon of the cool, the young parisian, who originally came from montélimar, could be heralded as a graphic arts pop star, if that wasn’t actually far too narrow-minded when describing the richness of her inner being. Leslie David is an entrepreneur, the daughter of two artists who sold their silk paintings on the towns markets at the end of the 70’s.

She witnessed her father’s evolution as a CEO when he launched the far more lucrative business of selling deco posters made by his wife. She certainly learned a lot from this experience. Fille de deux artistes qui vendaient leurs peintures sur soie sur les marchés à la fin des 70’s, After her studies at Lyon’s Fine Arts School, and Starsbourg’s Art Deco school, where she majored in Graphic Arts, art-direction and illustrations, Leslie David had a short yet “very educational“ stint in an agency before going freelance, eight years ago. Today her studio has a team of two to three and goes from project to project with enthusiasm. “My circle of friends is more into music and fashion, so, since it snowballs, I work a lot in these sectors, however I love trying my hand at anything.” Chanel, Maison Kitsuné, Le Mont Saint-Michel, Claudie Pierlot or Lancôme, Leslie David has currently been elegantly surfing the wave of success without ever losing sight of the infinite number of opportunities found in the creative field: 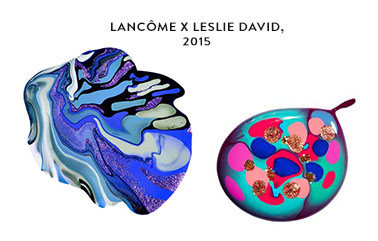 « I love working on many different projects at the same time "

"whether hotel or restaurant branding, fabric design for fashion houses or illustrations and LP covers’ design… Today I have a quite large active portfolio. It’s certain that when a project succeeds, people tend to call you asking for the same task, yet I try as much as possible to get pleasant changes!” A compulsive creator, Leslie David never closes any door even if it means stealing the show where she wasn’t expected to. She has just recently created and signed the visual identity of “Stereokids” a brand new music festival for children with her friend Pédro Winter and wandering deeper and deeper into the world of design and deco. “I started working in this universe with TH Manufacture for whom I imagined a set of plates, followed by Thevenon for whom I worked on furnishing fabric patterns that are to come out next September at Maison & Objet. I also worked with the editing house Moustache who contracted me for the design of wallpapers an carpets due to come out in the coming months.

In the future, I would love to be more involved with the interior design world, hence why the Designerbox project is very important for me.” Her ambition and staunch self-esteem candidly placated, Leslie David remains easygoing. More of a girl next door than a diva in the ways she describes herself, she finds it sometimes difficult to talk about her success. “It may be because I don’t have the time to work on personal projects and as a result work on all orders as if they were my owns.” It is thereby quite logical that her collaborations turn out to become personal projects as it was the case with the poster series “Liquid” sold on her e-shop. For those, she developped a unique technic, resulting from secret experimentations, that was initially devised for a project for Lancôme. “Another constant in my line of work is the fact that I love doing researches on the mingling of different materials or uncanny graphic universes. I wager a lot on stumbling upon surprises that are often interesting.” Rich happenstances that are the fruits of tried inspirations, the works of Leslie David conquer the hearts of professionals and dilettantes alike. Even though she’s nowadays “somewhat fed up” by it, her set “Souvenir de Paris” synthetizes this experimental take on her work, key to an ever-renewed success. 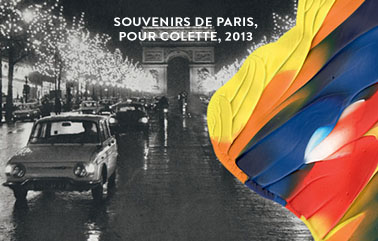 Ever since her branding work for Glossier, a cosmetic brand sold exclusively online, the “Leslie David” signature became legible abroad. While these lines were being written, the young woman flew to Sydney where she took part in “Make Nice” an international conference bringing together world-renown lady-creators. Much more than a pop star in Graphic Arts, Leslie David, even if she deflects the idea of actually being an artist, walks in the footsteps of the greats such as Sonia Delaunay who she cites willingly as being among her inspirations. 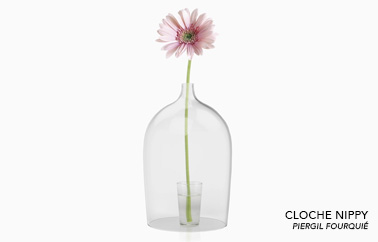