As a creator of object that are linked to contemporary issues, the 5.5 designstudio has been questioning for the past 10 years both the brands and the final consumers about their relationships with objects. Their dashing and varied creations, rather than being manifests of a style or an era, are actually born out of the will to shake things up with their novel ideas. Jean- Sébastien Blanc, the creative director and today’s spokesman conveys a nicely articulated speech : something that is to be expected from this experienced communicator , a co-creator of his own success…

When they first met on the benches of the Olivier de Serres School, the students, who would later become the founding members of a studio but at the time a band, found their sweet spot while working on a social project. Their graduation project developped for the Secours Populaire (a French equivalent to the Salvation Army) “Reanim” consisted in breathing life back into torn pieces of furniture through a healing process. Better than a mere restoration process, the treated objects underwent a cosmetic surgery operation that while reinstating their prime function would also set them back into modern surroundings : “Reanim was the starting point of our association and stands after 10 years the emblem of our very own outlook and bearing in life.” From the start their will was to treat the object as a true subject, to wonder whether it needed to be saved and how, but also to ponder its final use.

"Today everything exists already, there isn’t any censorship anymore : anything that we desire can be produced. The designer must ask himself what he brings into what he’s creating, whether there’s a legitimacy…"

This is what still motivates us and mainly what can refrain us”. Stemming from this fundamental postulate, the project “Ordinary Objects” was born a year after “Reanim”. 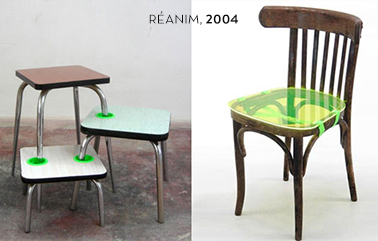 Rather than using prime materials to come up with standard novelties, the collective aimed at restoring the image of a set of existing functional objects that got their legitimacyfrom their certified use but suffered from an obvious lack of identification. Hangers, multi socket extensions, old school lemon squeezers or other “prime objects” got out of the closet to get a star treatment with the help of “placebos” which, avoiding misrepresentation, brought glamour to their images and granted them the deserved status of design icons. “This collection was exposed during the “salon du meuble” amidst a set-up that was modest by design, somewhat like a recreated student room, under the title “ordinary objects inside a standard apartment”. It was quite funny at the time to see our project alongside the huge stands of well known and classic editors.” At the opposite side of an aesthetic and elitist trend which placate the designers as warrants of good taste, the 5.5 philosophy stands to aim with precision in order to remain affordable to all. After 10 years of a much talked about creativity albeit within the world of galleries and museums, the collective became a studio to better reach the mass market.

«At one point even if our work was recognized, we became somewhat frustrated because we felt isolated.Our productions were well publicized but you couldn’t find them. We wanted to work on a something that would exist and reach the widest possible audience :

"for a designer there is nothing more exciting than seeing his objects alive inside daily lives. "

On its tenth birthday the collective mutated into a studio surrounding itself with a team that was subdivided into cells and all the particular or transversal tasks of each founding member was officialized. The USB key in the shape of an actual key for Lacie was a turning point : sold by thousands it proved that “our sympathetic design could also generate some business”. 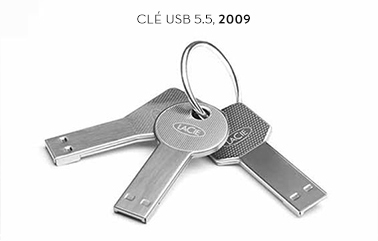 Scotch Brite, Haagen Dazs, Renault or even Moulinex : numerous famous industries and even high street brands like Veuve Cliquot are nowadays calling the 5.5 spirit on issues ranging from product design or packaging or even space management. “Since the projects vary in scope, they are never the same. We do the splits permanently and we assert not having any signature style or pattern. The only constant is the spirit that we breathe into our creations”. Innovating and astute ideas, a practical side and a good deal of humor : to be 5.5 certified, a good design recipe stands on the right combination of these base ingredients. Nowadays, the mutation of the collective into a studio does not change the initial postulate : the object remains a full subject, an occasion to laugh and think while also the best vector of communication . “We are closely looking at the concept of productizing which implies that a good product is the best advertising campaign.” Armed with this observation, the studio imposes its vision far beyond the product and proposes a true strategy when working at the service of its numerous clients, though refraining from taking itself too seriously. “A laughing consumer is a seduced consumer !” : design devils, provocateurs or craftsmen of ideas, the founders of 5.5 designstudio are all but big kids who have been able to combine their favorite games in order to become 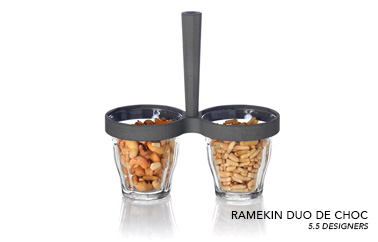