«Utopia is a mist from where doable ideas are surgingˮ a much a smooth talker and as an enlightened dreamer, Eugeni Quitllet injects some poetry into mass production to build a world where beauty becomes affordable to the largest possible audience. His optimistic outlook on life probably comes from his childhood in Ibiza when freedom was allied with his fertile imagination. Raised in the 70’s, in Ibiza, the Catalan designer was lucky to “be able to go to school, albeit not that much! Between the ages of 8 and 10, I spent two years out of the school system and I was able to self-educate myself, far from any adult influence.».

Exclusively nourished by the observation of the surrounding nature , the young Eugeni played of course at constructing, assembling and disassembling, in short at doing “what is nowadays called design which matches perfectly what I was doing when a youngster. If the game has become more serious as I have been growing, it has still remained as imaginative as ever.” After an art school in Ibiza and a graduation from Barcelona Llotja school of interior design, Eugeni Quitllet set up his studio in Barcelona. Soon he felt constrained within the boundaries of the Catalan capital. “I soon understood that it would be difficult for me to develop what I wanted there”… 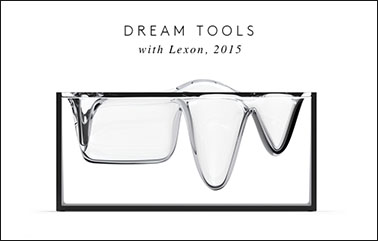 Decidedly fond of freedom, Eugeni caught a flight to Paris and settled here where he started defining the creative language that is key to the recognition he gets from both the public and critics today. “I now stand with one foot in Barcelona and the other in Paris“ : his taste for movement doesn’t leave the designer whose objects are noticeable what with their dynamism and vitality :

« “I always try to include life into static elements »

this can be found in Bum Bum his outdoor furniture edited by Vondom in 2014 which was conceived like a family of musical instruments and whose organic round shapes are carrying the latest technology – all pieces come equipped with Bluetooth loudspeakers to air music. 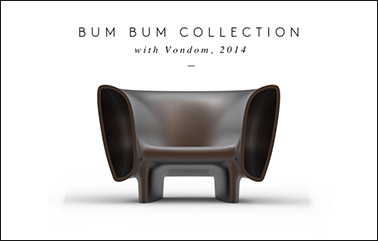 «There are many angles in my work. The one that comes up the most regularly is the idea of having a unique piece endlessly repeated”. Thereby, EugeniQuitllet envisions design systematically under an industrial point of view : “Industry is the mean that enables the endless repetition of the piece in order to be shared worldwide. It is the goal, even the essence of design. Design can’t be conceived as an handicraft.».

An industrial designer by faith, the creator also distinguishes himself by embedding his imaginative poetry in the heart of the production process. “ I find it moving to have an object carrying the same strength as an handcrafted piece while it was conceived to be cast in a mold so as to be infinitely reproduced. The goal here is to freeze in time a gesture, an emotion through a process that will enable it to be conveyed to billions of people.”. As a result, the designer enjoys upturning processes and materials in order to underline their narrative powers : the Tabu chair for Alias, was made following a high tech process : digital printing but with wood not plastic ! “Tabu isn’t a chair, it’s a seed ! the seed of things to come !“ beams Eugeni. Nature against machine ? Rather than opposing one to another, Eugeni prefers to conciliate opposite ends : “What I love is being able to synthesize natural things and, conversely, to infuse nature into synthetic material”. The I Shine, a vase created for Kartell, illustrates once again how he masters paradoxes to the point of generating illusion: the plastic material is so finely exploited that the final result gives the impression that the vase is made out of crystal. 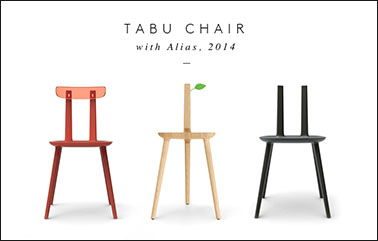 In love with opposite ends, he deftly plays with hollows and sounds, granting to his objects an unmistaken aerial look. ”As a matter of fact, I can overlook the shape as I focus on the air surrounding it to grant meaning to the piece”. Eva, the fire cell that he imagined for Designerbox is unveiling itself most neatly through the empty spaces running inside the tube : it’s through them that the piece’s beauty and functionality are perceived. ”it’s interesting that it’s not the outside of the piece but it’s its inside that is drawn. It’s the bottom surging to the surface”. Elected creator of the year by Maison & Objet, a major French event in interior design, Eugeni Quitllet presents a retrospect of his past work and upcoming project, including the unveiling of Eva, during the January 2016 exhibition. 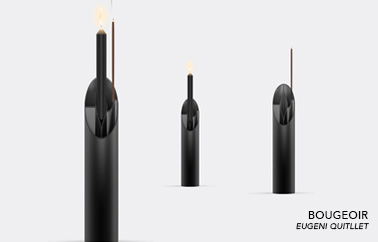