1/ EVERY PICTURE TELLS A STORY!

“Finish your food…” Remember: the painful childhood refrain took on a whole new meaning when it came to dessert, as the conscientiously-swallowed delicacies revealed beautiful stories to be deciphered! Gien Faïencerie has made their mark on generations of food-lovers with their “storytelling plates”. Creator of well-licked clever riddles and historic illustrations, the Faïencerie was not born yesterday: Founded in 1821 by Englishman Thomas Hall, the company grew successful over the years thanks to its unique techniques and expertise in producing and decorating pottery, filling our younger years with delight. Today, the Gien Faïencerie is a member of the prestigious Comité Colbert, which gathers some of the greatest names in the French Luxury and Lifestyle industry, and continues to reinvent itself, collaborating with talented artists, such as designer Olivier Gagnère.

For those former little eaters who have now turned into nostalgic adults, Designerbox has called on two happy artists, swift and expressive with a pen, to adorn the brand’s famous saucers of delicacy with stories. However, for dessert or even aperitifs, the time has come to bury former conventions: With Mrzyk & Moriceau, there is no longer any need to decipher or finish all your food, the dream remains intact, for food to be enjoyed at leisure! 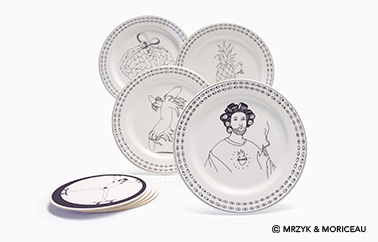 2/ A HISTORICAL KNOW HOW

From the creation of its own clay to the baking to the decorations, the Gien Manufacture has been making its name for almost two centuries through the tried-and-tested techniques and expertise, these reinvented delicacy plates being privileged examples thereof:

1- The moulding used during the fabrication of these plates uses a mixture comprising of clays, kaolin and sand which is milled, mixed, sieved, filtered and kneaded.

2- From a sausage, it is then divided into slices (or “balls of clay”) and the clay is placed into a mould that rotates itself. A “calibre” then spreads the layer of clay to make the piece.

3- Once removed from the mould, the “finishing” phase begins: the plates are trimmed and polished to give them a smooth and flawless finish.

4- After drying and baking at 1160°C, the plates become “bis- cuits”, ready to be decorated with a design made exclusively for Designerbox by a stamp the exact shape of the plate.

5- The final stage, the enamelling (12 to 24 hours at 1060°C), is essential for coating the porous biscuit and ensuring the shine of the finished piece and its resistance.

What do you think about our plates ? 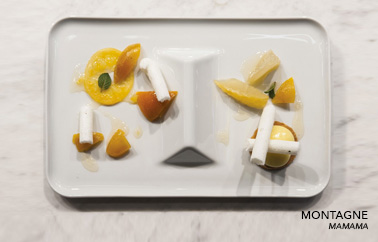