From its Scottish roots down to our own time, we will tell you all about this iconic pattern which transcends fashion and is found everywhere especially in decoration and upholstery !Its roots are modest and date from the late nineteenth century, when it was used by shepherds for their clothes. It was Edward VIII, as Prince of Wales, who made it popular. He posed for Vogue in 1934 dressed in a hound’s-tooth suit, and the model was immediately adopted by high society, turning it into their distinctive sign of wealth. It was then Christian DIOR who drove the point home in 1938 with a black and white suit for women which became a best-seller and consecrated hound’s-tooth tweed as an emblem of the designer house, and later on of the chic and luxurious in the 1950s and 60s.

Hound’stooth has been used since then in all sectors, especially in upholstery. A symbol of this phenomenon is the iconic LADY armchair designed in 1959 by Marco Zanuso for CASSINA (see image) which still evokes the name of a creator or a house of well-known editions.Hound’s-tooth cloth is timeless and has never aged. It can be hound’s-tooth check (thicker), woven or printed at Designerbox we love it because of its graphic dimension, less boring than the simple checked pattern. Even so, use in moderation

Icon of Italian design, Paola Navone imagines for Designer box a large piece of Cotton that can be use as a tablecloth, a plaid,... bringing a graphic touch to your dinners or picnic. 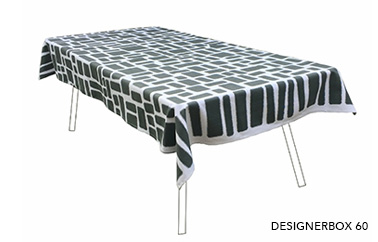