master of light, designer and poet

Since the mid-1960s, Ingo Maurer has been a master of light, designer/poet and entrepreneur. His universe is a hymn to the uncompromising lightness between design and art. Born in 1932 in Germany and trained as a typesetter, Ingo Maurer turned to design after a sojourn in the United States in 1960. He set up his own studio in 1963 in Munich and created “Bulb”, the rst in a long list of iconic lights that marks 20th century design with a touch of humour and delight.

He collaborated very early with major brands such as Artemide among others, but it is the handcrafted pieces in his own workshops that earned him international recognition. From incandescent light bulbs to the latest generations of LEDs, Ingo Maurer will never cease to appropriate and transcend each technology to deliver lighting objects or installations like an array of luminous poems, demonstrating that beyond illuminating, it is above all about bringing to light, giving meaning, adding poetry to our interiors. 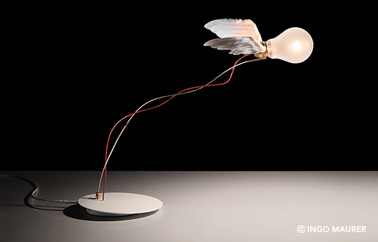 Ingo Maurer tells us about the creation of Porca Miseria, one of his marserpiece : “I found too many designs there slick and design-conscious. Porca Miseria! is partly a kind of revolt against that tendency. The chandelier was first called ‘Zabriskie Point‘ after a film by Antonioni where a castle was blown up in slow motion. But then the first few Italians came for a preview in Milano, and (so no one had seen it ever before) said, ‘Porca miseria!’ which is a kind of a cuss: “What bad luck!”. So I immediately changed the name to Porca Miseria!.” 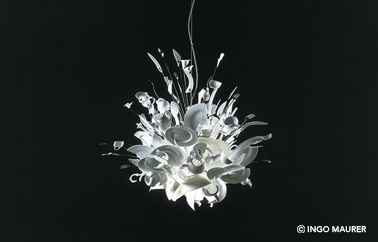 PERCHOIR, the jewelry box and holder imagined by designers duo Leonard El Zein for Designer box #52 or the HUMO glass bell designed by studio NOCC for Designer box #14 bears witness to the imprint of this creative genius in the design history and the eternal source of inspiration that constitutes his work for present and future generations of designers.