‘White Cubes’, the name of Faye Tsakalides’ design studio, marries the designer’s favourite shape and colour. It also brings to our mind a vague, quasi-science-fictional object created to transport us through space and time on a unique journey through the designer’s universe...

We find ourselves, first of all, in Greece, Faye Tsakalides’ native land, in ancient times. A devotee of art, the young Athenian grew up in the shadow of the Acropolis with its phenomenal temples, and these shaped her imagination forever infusing it with elegance and majesty. 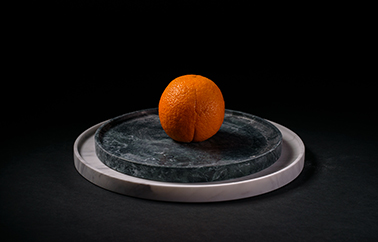 Inheriting the spirit of Phidias and Praxiteles, sculptors of the eternal, and passionate about her country’s inexhaustible art history, it’s from Greece that she sources her favourite material and one that she selects with great care: marble, a widely used stone in ancient times, and one that has survived down the ages without losing any of its majesty. The idea of timelessness so dear to the designer is best expressed through this polished stone that she now uses almost exclusively and that governs her comings and goings between Athens, where she has her office, northern Greece with its well-known quarries, from which she gets her supplies, and Tino, the island famous for its expert artisans and marble sculptors, with whom she collaborates. But the designer’s wanderings go much further than that. We need to expand our perimeter if we’re going to fully understand the uni- verse of a designer steeped in a culture without limits or frontiers. Having left her native Greece to study fine arts in Edinburgh, the young designer then headed to Paris to join the Belleville architecture school. But she very quickly realised that she preferred to work on a smaller scale than buildings and that the sculptor’s eye that she inherited from her spiritual ancestors was pushing her towards a career as a designer.

From design weeks to salons, from prizes to exhibitions, she moved from western Europe to Scandinavia to the United States, before setting her sights on the Middle East. At each stage of her journey, she drew from local cultures in a continual refinement and affirmation of her style, in doing so constructing a unique creative language with a universal vocation. From the Nordic countries as from France, she retained a pared-back aesthetic, from New York she held onto the sense of creative freedom, and so on... By this point far removed from the ancient sophistication in which she was first steeped, the designer now showed a penchant for simple lines that she initially translated in neons before a return to her sources – choosing marble as her go-to material. A popular collection from the moment it launched in 2018, the Rituals series fed Faye Tsakalides’ ambition to move through space and time and create something lasting. 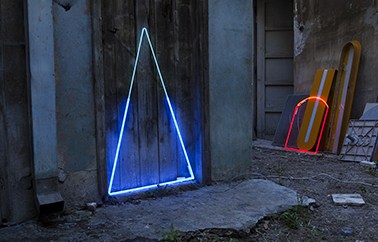 Capturing the essence of the most banal daily rituals – meals, studying, washing she hones in on what is special about them in her functional works of art. Playing on the poetry of contraries luxury materials alongside simple shapes, light modern design alongside traditional, heavy materials Tsakalides grasps eternity in the moment. If objects have a soul, they give meaning to the most anodyne acts. Along the same lines as the Rituals series, the designer created a hook for Designerbox whose practical application, although obvious, could almost be secondary. Providing a small dose of delicate marble that works well in contemporary interiors, the piece, which has a leather strap from which a second object can be hung, invites us to take a fresh look at an ancestral material that espouses through the simplicity of its curve the codes of modern life.