The Duralex by Picardie : A mind blowing glass

Unbreakable, really ? It seems that the catchline of its beginning (“Dura Lex Sed Lex” a latin proverb meaning Law is tough but it’s the law) was telling the truth about the Picardie glass. If the former star of the 60s, the beacon of the Duralex brand hit some hard times at the beginning of the millennium, likewise the phoenix it arises from its ashes to better serve you when dining. Would you care for a drink ? As the youngest brother of the “Gigogne” glass, the “Picardie’ glass with its beveled look stole the show and became the consumers’ darling. No hard feeling there, the members of the Duralex family are known to withstand any event. In the glassmaking workshop of La Chapelle Saint Mesnin, where the famous tumblers have been made ever since 1945, a specific technique, borrowed from windshield making, is being used. In fact the glasses are heated inside ovens running 24/7 at a temperature of 1550°C (2830°F) and when taken-out, they are cooled down quickly using air-blowing. This thermal shock is what grants them their fabled durability. 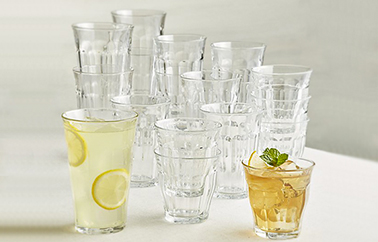 As in the car-making industry, the glasses are then submitted to regular crash test – selected samples are thrown to the ground 10 times from a height of 40cm- all this to ensure their endurance before reaching the market.This sturdiness and the fact that ultimately the Duralex glass breaks into round pieces and not into dangerous shards were the features that enabled the Duralex glass to rule supreme on the tables of the school canteen during the 60s. And that was only the beginning. Not only was it a source of play for the pupils with its mysterious numbers engraved on its base, the tumbler also carved for itself a nice repute abroad. 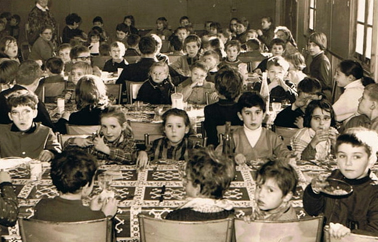 As an emblem of the “made in France”, this affordable object was at the time the epitome of chic in foreign countries. From the 90s onward, despite the economic downturn and hard times that hit Duralex, the “Picardie” fan base was maintained. In 2008 the brand is taken over and relaunched : it’s time for a new start for this star which is far from being used up. It keeps showing up in the most exclusive places and can even be seen stroked by Daniel Craig aka 007 in the “Skyfall” movie shot in 2012… In 2015,it is celebrated by the thirty-year-old members of the 5.5 designstudio, as an emblem of their youth and of cool nostalgia. 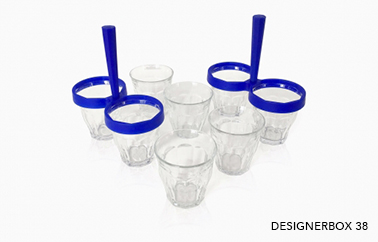