If post-modernism has been one of the sources of conflict and division among critics and creators in the 20th century, this movement linked to pop culture has clearly contributed to unleashing creativity in architecture and design.

Art Deco revisited in a « cream pie style » for some, Rambling stacking of shapes, colors and patterns for others, every creation was actually intended to shock, to reshuffle the cards by bragging: «everything is possible, nothing is forbidden and especially not humour». But far from having generated a chaos of shapeless and now outmoded works, the movement has above all brought out amazing talents and creations that still continue to inspire contemporary creators. Designerbox invites you to discover or rediscover with greed, this movement led by genius creators in the 80s. Postmodernism has often been described as ugly, superficial, but 30 years after the movement’s peak, it is possible to overcome the hysterical debates that followed the construction of the buildings of Michael Graves, John Hejduk (leaders of the New York Five) or the colourful objects of the Memphis group. 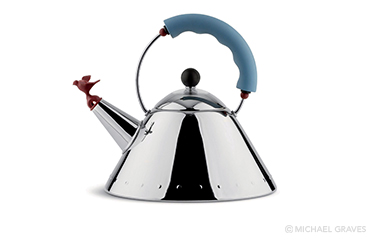 Far from being an architectural or «design» phenomenon, we can clearly perceive considerable influence that this movement had and whose style was perhaps most succinctly captured by Milanese design groups such as Studio Alchymia (directed by Alessandro Mendini) or Memphis, of which Ettore Sottsass was the brilliant sun god, loving guru, libidinous and charismatic. Fuelled by the counterculture’s enthusiasm for drugs and free love, it was in 1981, when Memphis was founded, that its influence was truly felt. With a set of furniture, all in bold colours and patterns, some apparently anti-functional and others with fanciful features, Sottsass’s initiative took off and its influence would soon be felt not only in the field of furniture design, but also in the fields of fashion, architecture and even music videos on MTV.

In 1987, the year of the release of Gordon Gecko’s (Wall Street), after only six years of great success, Sottsass ended the adventure stating, «It’s like a love story. When you get used to it, you have to stop! » It was quite a trip, but the fun was over. What had begun as a call for complexity, contradiction and revolt was recovered by the establishment, it was time to discover other territories... 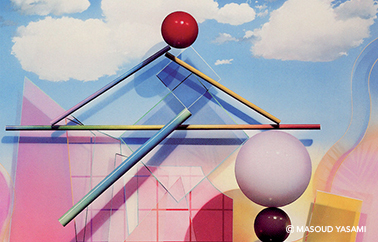 As a logical continuation, the 1990s, led by Philippe Starck as the new guru, saw the all industry sector become aware of the importance of design with a taste for a certain «soft madness style» that is still dominating. Due to globalization, we live now in a more relaxed era where we can freely borrow where we want. If «nothing is created, everything is transformed», what we love at Designerbox is the audacity of the creators who illuminate our environment with amazing objects or buildings. The Zaandamm hotel in Amsterdam, the new range of chair by Konstantin Grcic, the Funtastico chest of drawers by Jayme Hayon or the Cake shelf by Jean Couvreur ... Modern totems that distill a little humour, poetry and a certain cheerfulness into our daily lives and contribute to bringing out the best in our interiors. 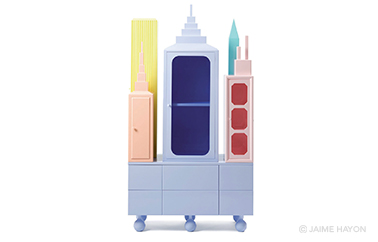