For designer box #47, we are offering you a trip in the design work of Samuel Accocceberry. A creative universe deeply linked to Pays-Basques, an area where omnipresent nature is an eternal source of inspiration and energy engine.

If Samuel Accoceberry was interested in creation in general since a young age, it was without any doubt because it opened a field of possibilities to his inquiring mind which took refuge from boredom and refused at any cost the restrictions of having to deal with a single task.

« I am specialised at being a non-specialist ».

in his thirties, whose versatile but nevertheless coherent career presently seduces many publishing houses.During his Applied Arts class, Samuel Accoceberry hesitates between typography, architecture and design before choosing the third option thanks to his attraction for 3D and to the very transverse opportunities offered by the designer career: «currently, my work allows me to change hats at leisure and to juggle between interior architecture, industrial design and artistic projects.» With his diploma and very technical training at hand, the future designer spends four years at the Beaux Arts de Nancy, which will open new perspectives and in particular will allow him to study abroad. His graduation certificate in connected objects allows him to work for Alcatel within the Advanced Design department and develop new uses related to telephony. 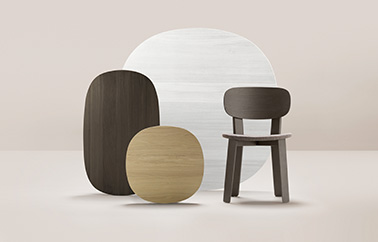 His job is both exciting and trendsetting, but also very specialised and it shall only keep the electron free for an instant: in search of experience and taking advantage of an unexpected opportunity, Samuel Accocceberry embarks on a flight to the ca- pital of design: Milan. Initially expected to last for a few months, the Italian experience will last for four years, as the young creator develops a network, working with prestigious design studios, such as that of Antonio Citterio. Back in France, Samuel Accoceberry joins the studio of Arik Levy, the author of Designerbox#1 and contributes to its exposure and development, joyfully tasting the agency’s intrinsic multidisciplinarity «Not being French, Arik totally escapes any labels which one may stick on us in this country. With him, one may intervene on works of art, furniture or perfume bottles and clothes, with total creative freedom». If this experience comforts him in his quest for emancipation, the only thing left is to make a name for himself.

Having received an award by VIA in 2008 for his projects Air Chair the seat and Infinity the shelf, he decides to open his own studio.Since 2010, Samuel Accoceberry has effortlessly navigated between industrial design, artistic direction, scenography and limited edition personalised creations, all having in common the will to promote the human dimension and know-how, identifiable by thoughtful and non-ostentatious graphic design. 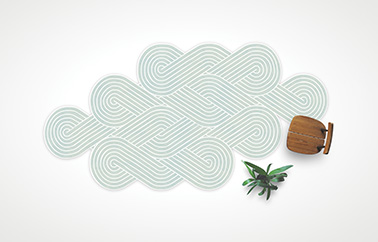 Created in 2012, his Tresse carpet for Chevalier Editions illustrates the designer’s coherent approach, exploiting the basic traditional tapestry crafts- manship – threads knotted together on a matrix – to create a graphic design in form of tribute. In a totally different register, but with the same narrative care, his collections for the Landes-based company BOSC, designed in tandem with Jean Louis Iratzoki represent as many respect statements for the original region of the brand, which is also that of the designer. The family of armchairs and sofas really strives to bring forward natural materials and local traditional craftsmanship, thanks to a contemporary design which doesn’t skimp on geographic and cultural references. 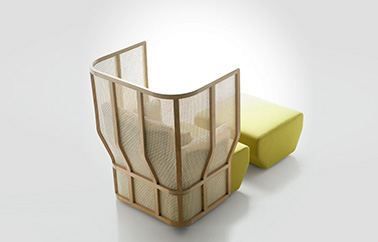 For example: The “Concha” series comes in the form of a seashell with reference to the sea and to the gulf of Concha de San Sébastian. With certain works, Samuel Accoceberry goes even further to promote the human side by entirely involving the craftsman into the co-design process. It was the case for his Porcelain + Sandstone + Wood limited edition collection, which is the result of his living in Périgord and of his close collaboration with a ceramist and a cabinetmaker. More recently, the Mòn lighting fixture presented by Delcourt Collection publishing house during the most recent Milan fair illustrates the close collaboration with Bruno Cecere, the blacksmith. Putting the human adventure before anything else, Samuel Accoceberry’s design thrives on selected collaborations with historic brands: Alki, La boite Concept, Tout le Monde Bochart, and today Designerbox, among other famous publishing houses, have been able to count on the young designer’s talent, having been awarded in 2013 the Creation Grand Prize by the City of Paris for all his achievements.