The optimistic design of Antoine Lesur - creator of the DesignerBox #49

Antoine Lesur is in his thirties, hyperactive, his eyes sparkle and he talks a lot, he asks a lot of questions about the environment but he is much more on the side of those who act than those who doubt.

Antoine Lesur came down on his bicycle from the heights of Belleville, where he set up his studio in 2012. He is visiting Designerbox to put the finishing touches to Hippo and is waiting with us for the interview time before dashing off again for his last professional meeting of the day.“I wanted to be a designer right from when I was three”: and as if to prove it, he takes us through his history. He holds a degree in applied arts, and then went straight on to get an HND specializing in design and then a Higher Diploma in Arts at the Boulle school. With no detours or accidents, he started out on his professional career with internships at well-known agencies such as Patrick Norguet. Later on, he worked for Patrick Jouin for five years before taking flight to establish his own name. Even though he confesses a certain respect for his famous employers, Antoine Lesur refuses to be linked to signatures and even more to impose his own:

« I like seeing the genius in daily objects that don’t need the name of the designer to be noticed. "

This is what has always fascinated me about design: the power of objects to transcend”.From then on, the eclecticism of projects with the flexibility in the way he takes them on is self-evident. “People have pointed out that there are many different approaches on my web site. In fact, the idea of being specialized terrifies me”. The common denominator in his numerous projects lies in the precision of the work, making the designer’s purpose extremely legible. It could even be a matter of getting straight to the point by building on the outline, like in the Hut project, carried out jointly with Marc Venot and which won the Émile Hermès award: the simplicity of the furniture in the shape of brackets, precisely to take users out of the surrounding ebullience. 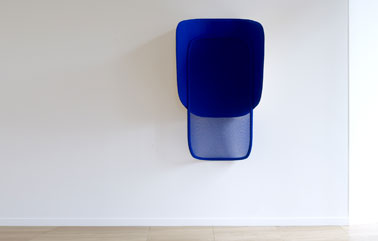 On the contrary, it could also be a matter of forcing a smile with unexpected legwork, like in the Huggy range designed by Maïori and madeindesign: Antoine Lesur is never mean with graphic vocabulary for writing good ideas in 3D. Hippo is named after the imposing mammal whose curves inspired it, the huge feet making it easy to identify, as is the unique shape of the salad bowl with a hint of the mischief the designer so enjoys. Another constant aspect in Antoine Lesur’s work, his taste for innovation, holds sway in the majority of his collaborations. 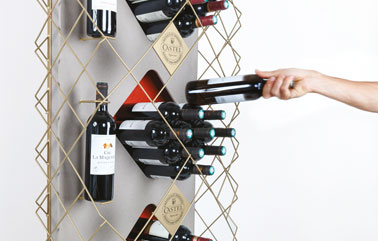 Not particularly creative but nevertheless fascinating, his first ever job as a “materialtheque” for Innovathèque consisted of unearthing and compiling the most convincing innovative material from manufacturers in order to compare it with professional architects and designers, and already showed his interest in the subject. As of today, an accomplished designer and committed ecologist, Antoine Lesur works hard with Serge Ferrari fabrics for the City Council of Paris to find a solution in “vertical gardens which could be applied and spread out a little bit everywhere”, and in particular, very soon under the windows of Anne Hidalgo… 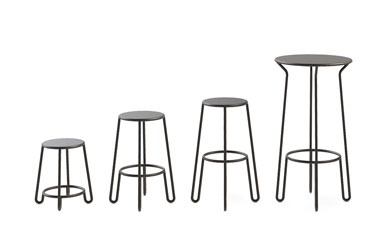 At the same time he is collaborating with Echy on the concept and design of a solar tracker, to be installed on roofs to capture the light of day and thus illuminate dark rooms without having to use an electric lightbulb. Antoine Lesur leaves us on his bicycle with an air of optimistic modernity precisely to go to a meeting with the start up on the Île-de-France, leaving behind him the Hippo to live its life on the tables of its fortunate owners – you!