In 2011, she established her offices in Rue de Navarin, now a highly-coveted thoroughfare in famous ‘SoPi’ – South Pigalle. Labelled “decorator to watch” by AD magazine, if Marion Mailaender has, like her neighbourhood, seen her popularity climb over these past years, then the small boutique that houses her agency “Design et fils” represents through image what can happen in an architect’s office. Hardly surprising when we learn that Marion readily defines herself as off the wall, both personally and artistically…

Originally from Marseille, Marion came to Paris for her “brilliant” studies at the École Boulle in interior architecture then in furniture design. Some years later, her southern accent has vanished, but she retains the simple and solar enthusiasm that makes her creations shine and that undoubtedly earned her her first job in a luxury architecture agency. A young worker, she designed Tropezian villas for wealthy Russians, the time to soak up the perfect dose of kitsch that she loves, even now, to use with humour. 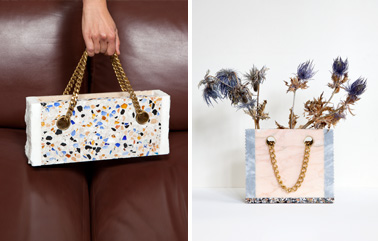 Several months later, she became self-employed, setting up “Design et fils”, an agency whose name immediately declares her profession, but which leaves room for some doubt as to its composition: “from the outset, I wanted it to be able to grow into a large structure to bring together a collective of creative minds at the heart of the agency, and above all, for my work not to rest on my name alone. “If in reality things happen a little differently and the media loves to glorify individual personalities, Marion does not stray from her generosity and therefore chooses to reside in the small boutique in Rue de Navarin, a former record store open to gazing passers-by. “To start with, I worked from behind drawn curtains, then one day a friend and I had fun creating a window display with objects found in antique shops.” A cabinet of curiosities from the front, seen from the inside, the agency abounds with varied projects and is occasionally transformed into a temporary exhibition space where talents and friends of Marion meet around a given theme. It is with that same spontaneity that she works as an interior decorator for individuals, boutiques and even restaurants. 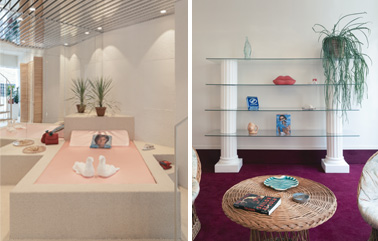 Her recent collaboration with shoe designer Amélie Pichard was a massive success. We have to say that their meeting, through a common friend, seemed predestined: equipped with the same humour, the two women instantly connected and combined their girly universes to create “Chez Pichard”, a bedroom/dressing room that today places pink at the heart of the fashionistas in eastern Paris.

« The important thing in my profession is staying free and joyful :

the layout of space has its importance but is no longer essential, in the sense that I’m not saving lives!” Leaving all snobbery aside, Marion Mailaender does not claim to be part of any particular art movement: she has a fondness for Italian designers from the 80s but above all likes to cross styles and eras, avoiding at all costs the practise of good taste, in favour of the unexpected. 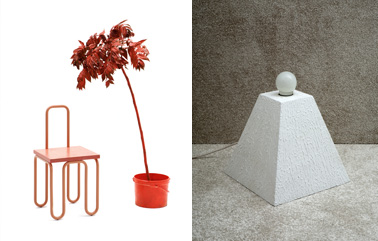 Her objects reflect the same appetence for the offbeat: thumbing her nose at a sententious and pompous design, her Crépis lamps, ‘morsels of takeaway pizzerias’, or even her Superpesante chair, a heavy humoristic variant of the iconic Superleggera by Gio Ponti, are welcome derisory pieces. Her more recent collection of Samples vases created from materials rejected by her clients and assembled in a handbag shape, tells of the irony of samples that were previously shunned, now glamorised. Instinctive, Marion Mailaender works with whatever she has to hand, playing at deflecting constraints in order to make people smile. For Designer Box 53, she has designed for the art of entertaining. A natural conduit of conviviality, her ceramic cheeseboard CHEESESCAPE aims to evoke the unpredictable texture of a soft cheese. In it, we also find the allure of an intentionally rugged living landscape. After a meal, subscribers will wholeheartedly appreciate the brute elegance of this “not neat” object that has been manually modelled by the designer before being cast…