From his studio in Brussels, Alain Gilles plays along with the interview with the joviality that characterises him. Never short of a touch of humour, Alain Gilles immediately puts his interlocutor at ease by reminiscing about his professional debut, a long way from design creation, as a research assistant in political science as well as his five years spent in a large financial sector group before embarking on a “career break”. “Nobody understood what my job was”, he says. A reaction that would drive him from one thing to another and end up bringing him back to his desire to create things. His degree in industrial design in hand, he worked for big names in Italian and Belgian design, before establishing his own studio.

Alain Gilles smiles at life and it smiles back at him. His designs are appealing, and recognition is not long in coming. Because they all combine soundness, personality and generosity: The Container sideboard and the Tectonic table, issued by Bonaldo, the Chubby stool for Verreum or his work for Buzzispace that cannot be seen in isolation from his experience – rare for a designer – in open-space, in a company with more than 1 500 employees, 250 people on each floor and everyone on the phone all day long, when he carried out back-office finance functions. In a perpetual quest for the perfect balance between rigorous lines and harmony of materials, for each creation the designer strives to achieve that culmination between masculinity and femininity. If he happens to create a piece that is formally very masculine and brutalist, he will always infuse a more sensitive and feminine resonance. The search for this ideal is apparent both in his objects and in his tools for the layout of of ces, which he wants to be visually functional and sharp, but practically to have a warm atmosphere. If in his early days the designer went against the current of the Belgian minimalist tradition that seemed cold and rather redundant to him, it was in order to return to it better and stronger by adding the dose of warmth and cheerfulness that he stands for.

« I have always enjoyed playing with the colour spectrum, and now I can play with wood, which I refused to do at the time, for fear of sinking into a mould that was too Belgian.» 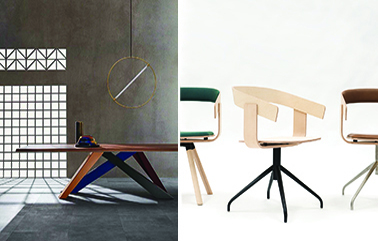 Today, Alain Gilles is one of those designers who manages to draw implacably accurate lines while infusing each creation with an almost maternal sensitivity. He who de nes himself as a “normal person” in his relationship with design is convinced that to create, he must have experienced things. It is this experience and the imprint of influences gleaned at random from life that allow him to generate such a singular universe. 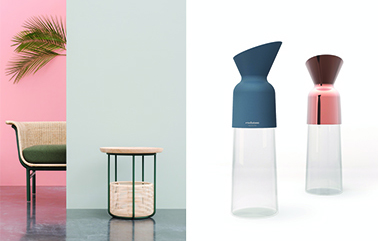 The designer likes to push the limits of his profession and tackle more global projects of interior design, like this “Empty Shop” for Oxfam, a pop-up charity shop in the most fashionable street in Brussels. On behalf of the NGO, his concept of “La Fabbrica del Valore” iconoclastically highlights the issue of the textile industry’s circular economy. A jack of all trades and instigator of concepts broader than the simple production of objects, Alain Gilles can boast all of this. 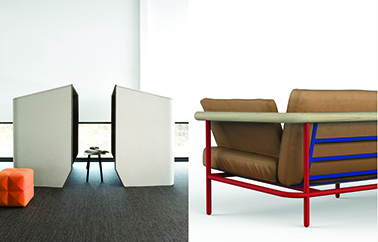 For January’s Designer Box, Alain Gilles wants to fill the subscription box “as much as possible” with a voluntarily simple vase-candle holder, which subtly invites multi-functionality, leaving everyone to take ownership of it in their own way. Particular attention has been paid to the question of the visual weight of different parts of the object. “With Matter, I wanted an object that was bigger than the box and that subscribers would bring it to life by making it their own.” Generous, we told you!