The colorful world of Marta Bakowski - creator of the DesignerBox #56

A quick glimpse at Marta Bakowski’s work on her website is akin to taking an invigorating walk through colour. There is no doubt that this lover of colour inherited her taste for pigment from her painter father. From her childhood “in apartments where there was always a paint workshop” comes her desire to ‘create’, which today characterises her work as a designer.

In the Netherlands, where she became assistant to famous designer Hella Jongerius, Marta earned her stripes and collaborated with prestigious brands and on projects combining artisanry with design. Upon her return to Paris, the designer launched her own studio from a successful residence in the Ateliers de Paris, and made her mark by creating pieces for interiors companies like La Chance, Ligne Roset and even Roche Bobois. Three years later, the young designer remains on the same quest for the perfect balance between artisanry and industry.

« What I try to systematically achieve, is the irregularity of manual work in order to transpose it in the industrial process. »

To do this, Marta undertakes her projects by voluntarily “getting her hands dirty” through immersion in factories or other manufacturing workshops. During the Design for Peace residence, for instance, she spent seven weeks in Burkina Faso with Tuareg artisans to showcase their expertise, trying her hand at their techniques to develop a more modern language and breathe new life into their designs with original objects. More recently, the Peri’Fabrique project initiated by Designers’ Days gave her the chance to collaborate with Maïté Tanguy, the well-known haute couture textile designer. The result of their creative exchange was Cache Cache, a composition of screens rich in colours designed to unveil the work of weaving in an unprecedented and singular fashion.

Disciplined in various artisanal techniques and won over by the freedom of the work, Marta Bakowski happily enjoys translating them into industrial language: the Sorcier wall lamp produced for La Chance is directly inspired by a handmade Gabonese ceremonial mask. 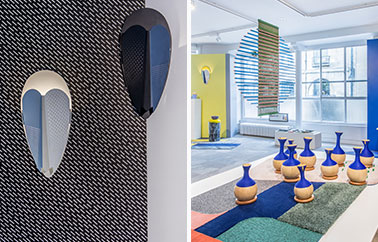 From the simplicity of curves to the mixing of colours: the designer endeavoured to circumvent industrial constraints in order to pay the most faithful tribute possible to the original object, showing it in a new light. 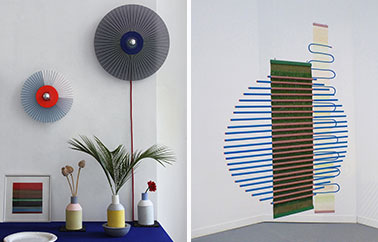 Therefore, diversion is often where the designer refines her style:

« I like to start with a subject that intrigues me, or a production technique, to decontextualise it. ».

Her collection of Domestic Playground rugs and coffee tables created from rubber, a material traditionally used for playgrounds, is an example of playing with preconceptions, returning high-profile status to this ‘low end’ material. The work of the subject itself is another source of inspiration for Marta Bakowski. In this way, she develops – at first alone then mentored by an expert – her own concrete, the “Cosmos Concrete”, whose result is quite close to terrazzo, but whose every component can be customised. From colour to aggregates, the material offers its users – interior decorators and architects – a multitude of possible applications. 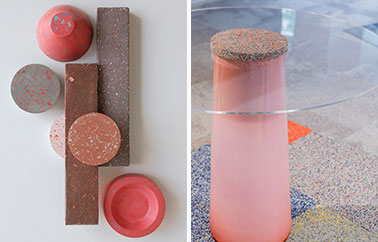 "In general, I like to leave room for the user, so that they might do what they want with my designs." In this spirit, Marta Bakowski designed the 360 clock for Designerbox. Positionable, it gives prominence to colours, notably blue, cherished by the designer.