Based in a small village in the Loire Atlantique area, Ferréol Babin decided to escape the hustle and bustle of the city in the pursuit of free creativity. Artist-designer and a bit of a hermit, while still being extremely talkative, the creator of Designerbox #57 expresses himself through eclectic designs that constantly question his contemporaries.

In the workshop set up in the heart of his home, Ferréol Babin is at his leisure to devote himself to his craft to which he attaches great importance :

« Although I was taught that a designer should only use his head, I need my hands to express themselves in the same way as my brain. » 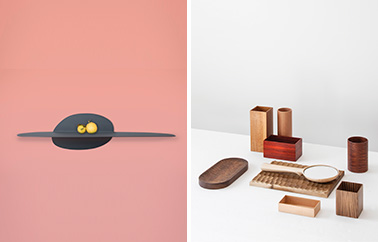 Witness his Lake, Building and Mountain ceramics series for the editor Pulpo, which he made entirely by hand and sent to the manufacturer for serial reproduction. Dividing his time between orders or industrial projects and gallery pieces, Ferréol systematically favours a handcrafted and artistic approach, finding a strong means of expression in design. “That’s why I chose to study this subject at art school.” A graduate of the Fine Arts School in Dijon in space design, the young designer then studied at the Nagoya University in Japan where he chose to specialise in object design, before completing his studies at the ESAD college of art and design in Reims. His end-of-studies project, the “Phases” lamp, was then spotted by Fontana Arte who released a wall version of the lamp called “Lunar”. Immediately awarded the Red Dot Award, this light instantly marked the launch of the young designer’s career. 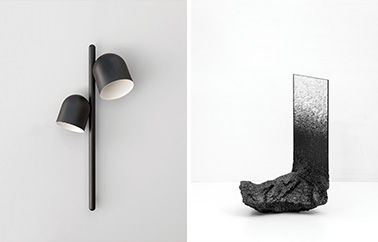 “I didn’t want to start out as an assistant to another designer, even though that’s the classic route. I need to say something through my creations, and I would have found only being able to support someone else’s ideas very frustrating.” At the same time, completing a one-year residency at Fabrica under the aegis of Sam Baron, Ferréol Babin continued to assert an uncompromising creative language. As he continued on his chosen career path, he would work exclusively alone, with no trainees or assistants, and would not be inclined to collaborate with other designers.

“I want to master each step, from the model to the prototype to the photo shoot: I do everything myself from A to Z, even my website, I don’t delegate anything to anyone.” This need for purity, to free oneself from anything that could interfere with or distort one’s work, translates into a universe that is as strong as it is expressive. 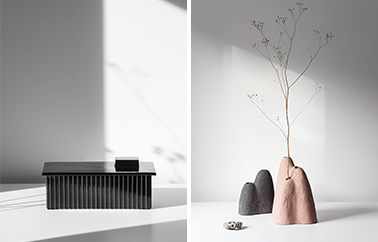 « I like to raise questions with the pieces I create . »

If Ferréol favours simple geometry over complex shapes or other stylistic effects, it is to preserve the timelessness of the object and thus give strength to the questions he likes to inspire. Between his gallery work and that as a designer, Ferréol often likes to throw us off the scent: halfway between sculptures and functional objects, his unique Fusion pieces evolve, for example, from traditional raw materials into industrial and technological materials, affirming their strange and singular beauty by the contrast. In the same way, the “Bark”, “Crushed Candy” and “Coal Soul” lamps have a very simple geometry but an indefinable relief and material that creates a feeling of surprise, or better yet, raises questions. However, this artistic approach does not exclude a willingness to follow a set of specifications. “I define myself primarily as a designer”: with editors like Bibelo, for whom he designed the “Surface” shelf or the “Cluster” lamp, Ferréol Babin has been able to satisfy his thirst for expression, while also meeting manufacturing constraints. In the same way, the “Double” vase for Designerbox may be a practical and functional object, but its unique shape will not fail to make an impression. «Since we are in the field of botany, we can talk about budding or outgrowth that can evoke the symbolism of motherhood and give this container a valuable and endearing dimension that goes beyond mere practicality. Even if the most receptive among us will not fail to interpret this unusual design in their own ways, the utility, aesthetics and originality of this double-tiered planter can be appreciated by everyone.