For its 62nd edition, Designerbox partners with Revol manufacture and invites its subscribers to discover the exclusive dish of its latest «CARACTERE» collection, a reflection of unparalleled expertise.

Chosen by Revol to imagine an anniversary collection on the occasion of the 250th anniversary of the Manufacture, Noé Duchaufour Lawrance was, above all, inspired by the daily life of the Drôme factory to give birth to « CARACTERE».
Like a calligrapher, the creator deploys an alphabet composed of elementary forms and signs a collection witnessing the bicentenary know-how. From the hand of the modeler to that of the enameller, passing through the rotating ballet of the machines: the plates and other containers of the range describe a transmission circuit inherent to manufacturing that has been passionately repeated for 250 years. On the table, the pieces encircled in black subtly punctuate the tablecloth to write the movements of a rôdée and evolutionary gesture, true choreography of the manufacture. 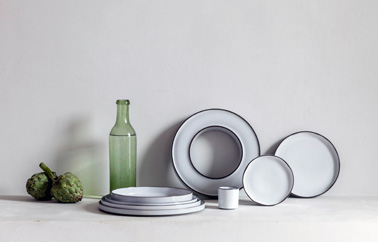 If, apart from its particular meaning in Revol, the circle is obvious in the field of table arts, Noé Duchaufour Lawrance wanted it as eloquently as possible. The initial outline drawing, drawn by the designer’s hand, is distinguished by natural roughnesses, which give the objects their narrative strength and depth. A fervent defender of imperfection as praised by the Japanese concept of Wabi Sabi, the designer gives to read the raw material in its purest apparatus.Breaking with the classic codes of porcelain which would dictate to discard the pieces betraying the slightest snag,

the creator affirms preferring the truth of the accident to the clinical coldness of the inaccessible perfection.

The contours are hand de-glazed, allowing the raw black dough to gush out in its irregular shape and faithful to the original design. It is in its full and loose, its bumps and its roughness, that the matter reveals its initial richness as its eminently living earth character. The poetry of imperfection is all the more demanding: Spontaneous artist, Noé Duchaufour Lawrance is also a technician at the service of the project and the user… As elementary as it may be, the «CARACTERE» collection bears witness to meticulous work. 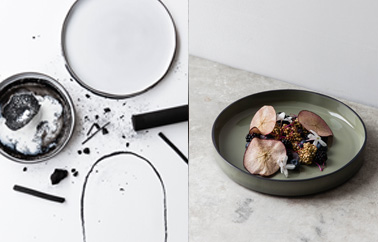 The thickness of the line, which delimits the perimeter of the objects, is, for example, the fruit of assiduous research to guarantee their elegance on the table as well as their feasibility within the manufacture. Invisible to the naked eye, the delicate heel drawn under each container, beyond the practicality in the handling of the table service, gives to the collection this aerial aspect which contributes to the poetry of the whole. Finally, the designer took care to reveal the black paste, rough and chalky, in a place inaccessible to the contact of the cutlery so as not to disturb the user… If it is declined in a neutral white to come to insert itself in tone on tone in the most contemporary decorations, the collection uses warm colors with names evocative of spices to come to recall its immediate origin. From the land of the Drôme, «CARACTERE» borrows the hues of the flora to naturally harmonize with nature, while offering the promise of an original gustatory journey punctuated with shades and sunny flavours. 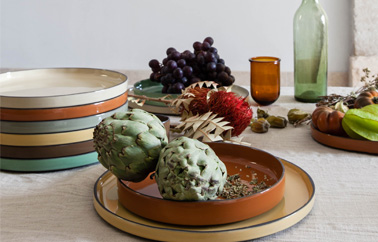