Colorful World of François Dumas - creator of the DesignerBox #33

Branded as a rising star among design’s up and coming generation, François Dumas titillates the interiors by coming up with pieces and set-ups that are strongly vivid and infused with a heartwarming dynamism.When he opens for us the doors of Krux : an alternative coworking space set in Amsterdam, of which he is one of the founders and Art Directors, the young designer enables the Designerbox subscribers to glimpse at some of the optimistic frenzy that lords over each of his creations. 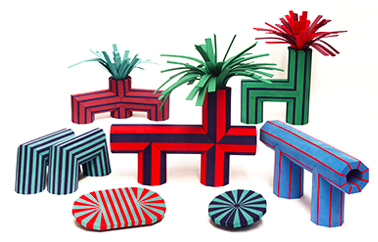 Having graduated from the famous Design Academy in Eindhoven and won the prize of the Design Parade Fair from Villa Noailles in 2010, François Dumas banded with three European accolytes that he met during his studies in Eindhoven – Gero Asmuth, Erasmus Scherjon et Dajo Bodisco – in order to create and open Krux in 2012. “Following my graduation, I pondered a while about where I would set my activity. I wanted to keep the international dimension that the Design Academy had given me. Both London and Paris were expensive, Berlin quite off-center…It soon dawned on me that Amsterdam was a good choice geostrategically speaking. Historically, it has always been a city opened on the world. From here to the main capitals in Europe like Paris, it’s a two hour train ride and it is thereby easy to get people to come…” The project was jump-started by the grant program that the city had set up for the creation of “Broedplaatsen”, or “incubator” in English, and this further incited the four young men to actively work on Krux introducing a project that was at the same time fed by utopias but firmly anchored in reality. “We had to write a strong proposal in order to present the idea of the place in its globality, in a practical way, one that took into account our vision, our ambitions, as well as the selection process of the candidates wishing to come and work in this place”.The result can now be seen: a concentrate of creativity, this pool of talents is now holding some 30 “makers”, people working as luthier, ceramist, graphist, hatter and even shoe maker originating from varied horizons and countries. In a vast warehouse whose interior was completely refurbished using as a model an early 20th century image of an old-school Parisian street in which the craftsmen shop are aligned but not alike.

"From the start, our intent was to generate a complementarity rather than a competitivity."

During the selection process, we have always been pushing the idea of mingling several sectors working alongside so that all players at the Krux can share their tools and knowledges.” After three years of existence, this co- working place, born out of the lavish imagination of four sweet dreamers, can now claim to have witnessed the official visits of some of the most influential personalities in design coming from all corners of the earth to laud its achievements. In order to discover François Dumas and seize the essence of his universe one as definitely to spend time in side the “Krux” and to have peek behind the scene where any as yet unfinished project is already a show in itself. This deciding background is unveiled on its dedicated website where, with a mere clic, the visitor can move from one finished product to the “workshop” tab which shows all the steps of its creation.

"I am regularly if not constantly on the prowl to find handmade processes that can be repeated:

I always look for the most simple gesture available, one which enables to replicate the craft ".

The Anémone carpet for La Chance illustrates perfectly this principle: on the “workshop “ side of the site, one may see that the breathtaking print which evokes a sea organism comes from a collection of painting done by the designer. “I started by finding the good size for the paint brush which would enable the hand to run freely in a gestural choreography that was then repeated over and over again in order to obtain a rich and dynamic result.”Often his idea is to find canny and non-boring devices in order to have a hand in production and maintain a physical contact with his creations: “Knapsack Kvadrat comes from a reflection around the Kvadrat iconic felt fabric. 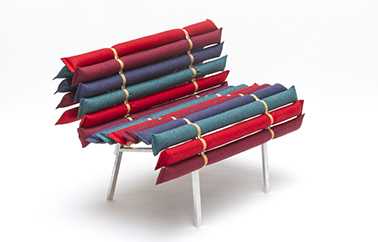 Using a simple gesture, as one would roll a cigarette, the fabric is rolled over a foam in order to create these comfortable logs. When this gesture is repeated, a seat comes out of it”. In order for him to “design by hand”, to use his very own terms, François Dumas is proving very ingenisous when it comes to setting up devices or selecting materials rarely found, if not altogether absent, in object creation. Mangos, the pop fruit basket imagined for Designerbox has been cut out in a very dense foam used in shoe-making to produce soles. The designer used this material to create his Eva Shelves and then on a more spectacular scale to carve some colorful sculptures for the exhibition Favoris#01 by editor Moustache. Mangos pays once again tribute to this novel use of material that was found within the Krux: “My partner and cofounder Gera Asmuth had bought this laser cutter, together, we had the idea to use it on this material that has been following me for years. The next challenge was to see if we were able to produce thousands of pieces here…” Well mission accomplished again for the Krux with this inspiring object!