Wood, glass, metal or brass… For Giulio Parini, all materials are suitable for exploration. Even before taking an interest in the function of the final object, the raw material and its infinite possible solutions have been the raison d’être of the young designer’s work since its inception.

After studying design in Milan, the young Swiss Italian studied for his Master’s degree at the ECAL in Lausanne, where he met Ronan Bourroullec, who at the time was leading a workshop. It was under the aegis of the illustrious designer that Giulio Parini’s first concrete experiments were born: focused on glass, discovering the fascinating and inexhaustible complexity of this material. «My idea was to print words made with coloured glass powder on the hot glass before it was blown. »
Rewarded by the interest of sponsors, the Glass Type Project will continue beyond his studies and will be developed in collabora- tion with the glassmaker Matteo Gonet to give birth to about thirty prototypes. Researcher without equal, Giulio Parini will later drew surprising resources from the many materials he encountered. 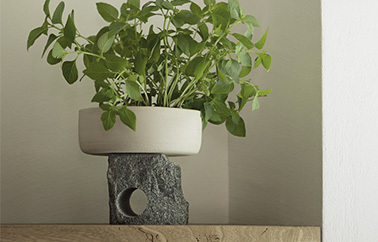 On the borders of art and design, Neolithic, its sculptural and eloquent centrepiece, intends to pay tribute to ceramic material, which was discovered in the Neolithic era, by playing on the contrast and offset between the porcelain top and its raw base. «In fact, both elements are made of stone but in a more or less evolved form.» “During the research phase,

"I worked on ultra-thin sheets of brass, bronze and copper to discover thanks to the flexibility and stren- gth of these materials, some unexpected shapes …" 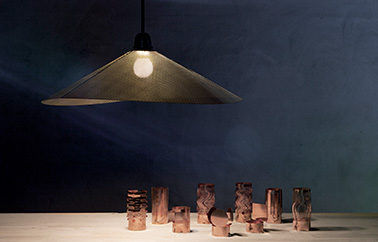 The Metallodolce publishing house, which he founded in 2017, is the result of extensive experiments on several types of metal. Origami illuminated, Metallodolce clever candle holders and lampshades play with superpositions and folding to display a poetic light in our interiors….» This project is ambitious, not only because I want to create other product ranges using the same materials, but also, and above all, because it is part of an ethical approach: extra-fine objects are sold flat, which considerably re- duces storage and transport space. That’s why I want to develop this technique. » Despite being passionate by material, which he constantly bring into question, Giulio Parini doesn’t forget the function. 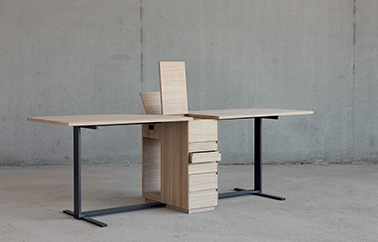 With the Le Suisse Office, he has created a piece that is renowned for its intelligence and practicality. Designed for two people, with shared storage space, the office can be adapted to open spaces, just by repeating the elements. Saving space and optimal organization of the workspace: nothing escaped the designer’s attention.For Designerbox, Giulio Parini still working on the function, and imagines an ingenious object from the brass sheets, offering several possibilities of use. «The four elementary plates are embedded together and on the vase, like a Lego, to create different functionalities. ». A unique approach in continuation with the objects and lampshades created for his label Metallodolce.