Designer of new experiences - creator of the DesignerBox #26

During the 2015 Designer Days in Paris, we had the pleasure of meeting Maarten Baptist, surrounded by his creations, at the Dutch institute which dedicated an entire floor to the designer’s body of work. In this wonderful and brightly lit Hausmanian flat, his vividly round and craftily modern universe mingled in perfect harmony with the classic surroundings.

Having studied at the Eindhoven Design Academy, at a time when Li Edelkoort, the famous oracle of fashion and future trends was artistic director, Maarten Baptist nowadays delivers a visionary that can be matched with any period in time. “Li Edelkort gave highly inspiring conferences about the future and yet-to-come objects. These clearly influenced my bearing and my surroundingsˮ Hinging his work on daily use, Maarten Baptist conceives objects that are related to both past and future. His ‘Lascivious sofa’, displayed at the Dutch institute exhibition, is a testament to his will to capture the traditional aesthetic codes and to use them for humane and modern creations. 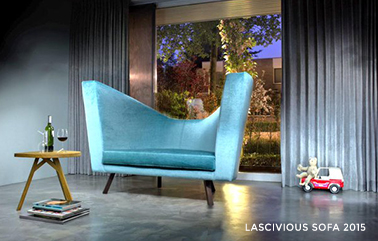 “My sofa plays on the point of view. At first glance, it looks like an ancient piece due to its height and the nobility of the materials I used silk and mohair. However when perused, it becomes clear that volumes and curves are inverted: sides are high in order to create a sheltering feel while the centerpiece is lower than usual so as to offer a better look at the space. I watched people sitting on couches for hours on end before conceiving this piece.”Armed with an inventive and sharp gaze on the world around him, Maarten Baptist is keen on cultivating this thin bond between past and future in order to bring fantasy and romanticism inside the living quarters of his contemporaries.ˮ

"On this point, one of the designers who inspires me most is Philippe Starck"

With a lashing and somewhat crazy humor he knows how to play perfectly on the upturning of codes to combine ancient and modern. Add to this his mastership of the commercial side of his activity, he is a designer in full and this is an approach that interests me.”Never leaving anything to chance, Maarten Baptist labors to ensure that he masters the whole process of his pieces creation 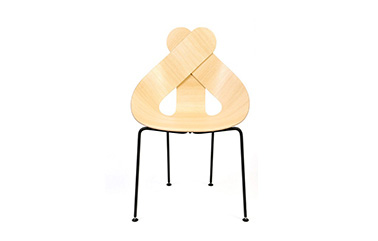 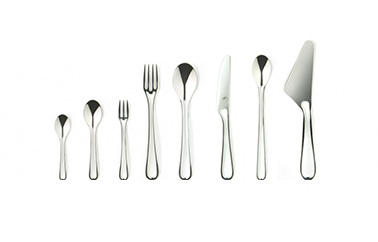 His graduation project, ‘Open Air Cutlery’, a set of airy and light tableware enabled him to work with the German industry at the very start of his career since it ended up being produced the year he graduated, in 2002.“When I conceive an object I do not content myself with a simple drawing, I like to deliver a product that has been fully worked out to the house of design I work with : for instance in the case of my ‘Lucky Love Chair’ I worked for 5 years on prototypes and then looked for the best ways to produce it before finally signing with the brand that edited it – in that case the Dutch brand buhtiq31. I could therefore be described as an autonomous industrial designer”. It is with this mindset that the designer set up his own studio “Joine” that has enabled him to collaborate with craftsmen and workshops and to edit objects under his own brand.The exhibition that day, at the Dutch Institute in Paris, confirmed that Maarten had carved a place for himself in the French design landscape. After having worked a lot in Russia, the designer felt the urge to focus on a culture much closer to his own. As a fan of food design, Maarten offers a rendition of the table arts that is completely in phase with the gastronomical expertise of France.

"I believe that a designer mustn’t overshadow the chef’s art of cooking.".

However it is interesting to come up with accessories that will sublimate the tasting.ˮAnd thus came to be the surprising ‘Magical Drip’, a strange futuristic test tube, initially conceived for a Dutch restaurant, which nowadays, in many places, tops the patrons’ plates and is used to season meals following all tastes.A decisive encounter with TH Manufacture, was the occasion for the young designer to put his taste buds to the test. For the young editing house, he worked on wine tasting, the second revered art of French cuisine. He came up with a series of three-footed glasses ‘Tripod Glasses’ which jogs the wine tasting process as much as it optimizes it. “Its uncommon base enables a better grasp of the glass and ensures an easier handling to vent the wine.”For Designerbox, Maarten Baptist imagined two glass trays on tripods “Golden Tripod”, which can complement the TH Manufacture’s glass assortment for a drink with friends, a tool to elegantly display the accompanying small bites and nibbles.